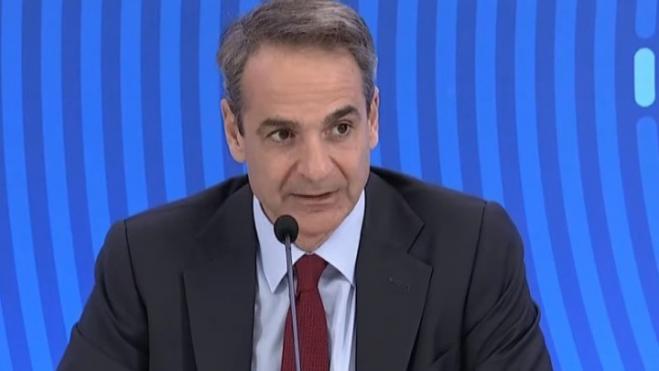 Kyriakos Mitsotakis paid a visit to Patras, from where he answered journalists' questions at a press conference.

The prime minister was asked about a variety of topics, including Erdogan's provocations, wiretapping and developments in the Ark of the World case.

On the Greek-Turkish front, Kyriakos Mitsotakis emphasized that Greece is a force for cooperation in the Mediterranean. However, it is condemned by its geography to have an unpredictable eastern neighbor, Turkey.

Athens wants an honest dialogue with Turkey, especially on the essential issue of the delimitation of maritime zones in the Aegean and the Eastern Mediterranean, something that has been the cause of the differences between the two countries for decades.

However, "under no circumstances are we willing to have a dialogue with the absurd", noted the prime minister.

As he pointed out, Greece will not ask the permission of the neighboring country in order to arm, as it is obliged to do. The PM also noted how his government has bolstered the strength of the armed forces

Wiretapping: "Anyone with evidence should bring it forth"

Asked about the wiretapping case, he said legislative intervention would be made to make the sale and use of surveillance software a felony.

The prime minister emphasized that the issue of wiretapping is something that also worries the government, especially when officials talk to their counterparts.

Referring to what is published in the media, he argued that these are science fiction scenarios enthusiastically embraced by the main opposition. Anyone with information should bring it forth, he added.

Asked about the protection of the first residence, on the occasion of the eviction of Ioanna Kolovou, Kyriakos Mitsotakis commented that it is unpleasant to lose one's home. But he added that most citizens pay after regulation and are consistent.

As he added, he has asked the Ministry of Finance to exhaust all possibilities for consistent borrowers in consultation with the banks.

He commented on the visit of Alexis Tsipras to Ms. Kolovos, among other things, and spoke of hypocrisy. As he said, during Mr. Tsipras's administration, 30,000 auctions were carried out and the NPL acquisition companies were established. He also spoke of "cheap gimmicks that don't work anymore".

The government has launched a coherent and costed plan of developmental projects for Western Greece, "more than 80 infrastructure projects, projects with a developmental stamp and a social character, which make up our narrative that Patras deserves to be the country's western gateway to Europe," Prime Minister Kyriakos Mitsotakis said