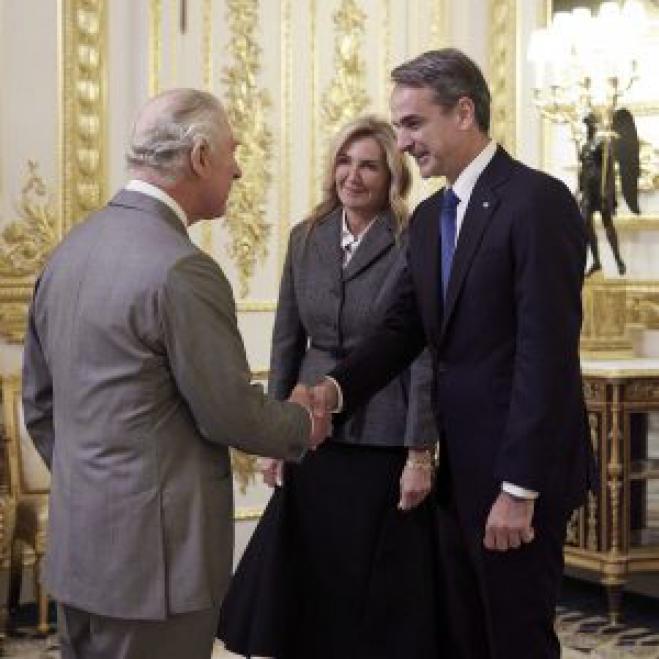 King Charles III on Monday afternoon welcomed Greek Prime Minister Kyriakos Mitsotakis and his spouse Mareva at Windsor Castle in London, designated as a private meeting, given that the British monarch received a head of government rather than a peer, i.e. a head of state.

Both sides have confirmed that talks between the Charles III and the Greek prime minister have revolved around the prospect of a “holistic” management, preservation and exploitation of the former royal country estate of Tatoi – due north of Athens.

Mitsotakis had been invited by Charles, then the Prince of Wales, last December, at the Dumfries House in Scotland, personally escorting the Greek premier and his wife on a tour of the estate.

The Greek conservative leader had earlier given a keynote address at an investors’ conference, organized in the British capital by Morgan Stanley and the Athens Stock Exchange (ATHEX).

Charles III and Queen Consort Camilla had toured Tatoi – as the Prince of Wales and Duchess of Corwall - when they arrived in Greece for a much-anticipated official visit in March 2021, on the occasion of the 200th anniversary of the beginning of the Greek War of Independence. The Tatoi estate, besides a landmark country home and related structures, hosts a cemetery where many of the Greek monarchy’s royals are buried, most ancestors of the British Monarch.

Works totaling 75 million euros are ongoing or pending at the Tatoi estate, now owned by the Greek state.