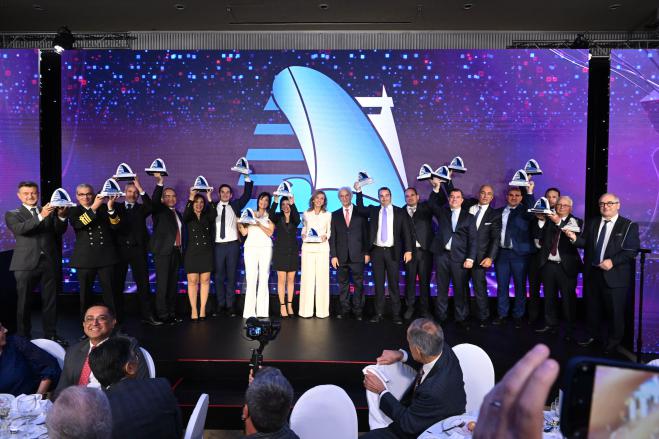 The current and former president of the Union of Greek Shipowners were both recognized with important awards on Friday, December 2, at the Lloyd's List Hellenic Shipping Awards for 2022, in front of over 1,000 guests from the shipping industry.

Melina Travlou, who earlier this year was elected the first female president of the EEE, was named Greek Maritime Personality of the Year. Ms Travlou was revealed as the winner of the award minutes after the Lloyd's List/Propeller Club Lifetime Achievement Award was presented to her predecessor, Theodoros Veniamis, who led the country's shipbuilding community for 13 years until his retirement in 2022.

Other notable individual awards included the Newsmaker of the Year award to shipowner Haris Vafias, for a long list of notable activities, including the launch of a second Nasdaq-listed shipping company, Imperial Petroleum.

Dorothea Ioannou of the American P&I Club was revealed as the International Personality of the Year after becoming the first woman to lead an International Club in its 167 years of existence.

The Next Generation in Shipping Award was won by Antonis Malaxianakis, founder and CEO of Harbor Lab, a technology startup that provides innovative software focused on port costs for ships.

In a greeting, the Minister of Shipping and Insular Policy Ioannis Plakiotakis congratulated the candidates as well as the winners of the 2022 Awards.

The annual awards recognize achievements and commendable activity in Greek shipping and promote Greece as a shipping hub. The winners are selected by an independent panel of judges representing a wide range of the Greek maritime community.

- Melina Travlou was voted as the Personality of the Hellenic Shipping of the year for 2022.

-The Newsmaker of the Year award was given to Haris Vafias, CEO of StealthGas and Imperial Petroleum.

-Antonis Malaxianakis won the Next Generation in Shipping Award, which is open to personalities up to the age of 40.

- Dorothea Ioannou, CEO of the management company of the American P&I Club, was elected International Personality of the Year.

-As Tanker Company of the Year, the jury chose Andriaki Shipping, the tanker management company founded by the N J Goulandris Group, now in its 70th year.

-Levante Ferries was awarded as Passenger Company of the Year.

-The Financier of the Year Award in Greek Shipping was awarded to the Athens Stock Exchange.

-Captain Kimonas Christodoulou, captain of the tanker "Christina" of Sun Enterprises for rescuing 27 refugees from a small boat in the Aegean in August 2022, was declared Sailor of the Year.

-Project Connect, which operates the Adopt-A-Ship program in Greek schools, was named the winner of the 2022 Education or Training Award.

-The prize of the ship of the year was awarded to "Aero 1, 2, 3", the newly built catamarans of the Attica Group, which are now in Saronic from this year.