"The Favorite", the new Oscar-nominated film by George Lanthimos, has already made its debut in cinema halls around the world.

Already since last Friday it has begun her screening in New York and Los Angeles halls, with proceeds of up to $ 105,000 per venue.

Among those who rushed to see the movie was also movie star Taylor Swift, who was thrilled and spoke highly of the Greek director through social media.

In fact, she also posted the corresponding screening program of the movie along with the venues. 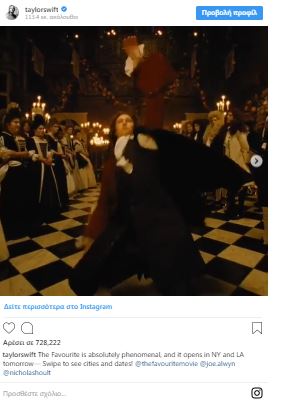