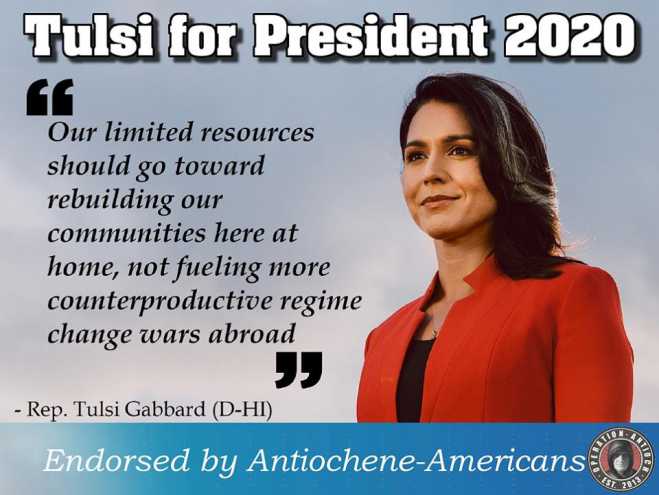 of the United States

“If Assad is removed and overthrown, ISIS, al Qaeda, al Nusra — these Islamic extremist groups will walk straight in and take over all of Syria.” – Congresswoman Tulsi Gabbard in a CNN Interview

Author of the Stop Arming Terrorists Act (H.R. 608), which would stop the United States from using taxpayer money to directly or indirectly support groups allied with or supporting ISIS and Al-Qaeda in their war to overthrow the Syrian government. Congresswoman Gabbard was the only American politician with the political courage and compassion to visit Syria and see first-hand what the United States’ foreign policy was doing to the Syrian people.

Donate to the Campaign here: https://tulsi.to/contribute

We, therefore, support her in her 2020 Presidential Campaign and urge others to do the same. Tulsi Gabbard has the right character, morals, and foresight on foreign policy that the United States desperately needs!

Operation Antioch is a network of independent Activists advocating on behalf of the Hellenic ethnic identity of the Arabized Romioi of the Levant.

Operation Antioch is the first public campaign organized by “The Daimones of Collective Hellenism”, which is an independently hosted project by e-Epanastasi. The aim of this project is to give a voice to those who feel their Hellenic issues are not being addressed by Greece and the Greek Diaspora.

The goals of Operation Antioch:
1. The reestablishment and recognition of the indigenous Hellenic identity of the Levant
2. To raise awareness about the ongoing Genocide of Antiochian Greeks, Armenians, and Assyrians in the Levant
3. Persuade the mainstream Greek Diaspora organizations to advocate on behalf of Antiochian Hellenism
4. End Funding and Arms to Jihadist Groups, which are committing atrocities against the indigenous Christians of the Levant