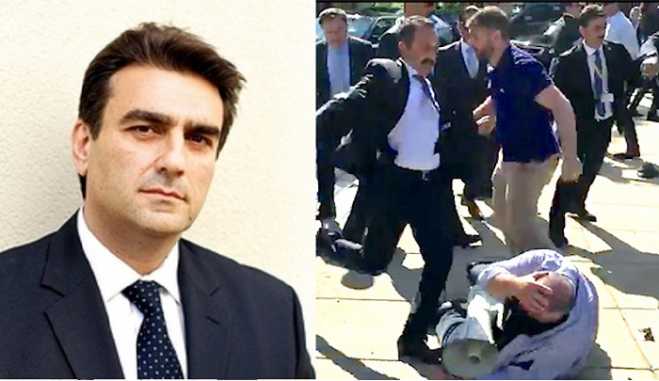 Greek lawyer Andreas Akaras believes he has a strong case against Recep Tayyip Erdoğan in a civil lawsuit alleging the Turkish president ordered his bodyguards to beat protesters in Washington, D.C. in May 2017.

The clashes occurred during Erdoğan’s visit to the United States, when his security team and armed guards violently clashed with a group of protesters outside the Turkish ambassador’s residence, punching and kicking the demonstrators.

Eleven people were injured and nine were taken to hospital after Erdoğan’s security detail attacked protesters carrying the flag of the Kurdish Democratic Union Party in the U.S. capital.

U.S. police characterised it as a “brutal attack”, while the U.S. State Department condemned it as an assault on free speech and warned Turkey that the action would not be tolerated.

Akaras, a lawyer for the Maryland-based firm Bregman, Berbert, Schwartz & Gilday, was instrumental in drafting the lawsuit served to the Turkish Ministry of Foreign Affairs in December, according to Greek Reporter.

The order to suppress the Kurdish demonstration was meant to curb the right to free expression, according to Akaras. Erdoğan was sending the message “I can waste you” to Kurds and other protesters in Turkey, he said.

The attorney acknowledges that the case could drag on for several years, but he believes it is a strong one. The evidence against Erdoğan’s guards was also laid out in painstaking detail by The New York Times.

Evidence includes footage of the head of Erdoğan’s security detail leaning into the Turkish president’s black Mercedes after it pulled up at the ambassador’s residence, then speaking into his earpiece. “The brawl began moments later,” according to the Times article.