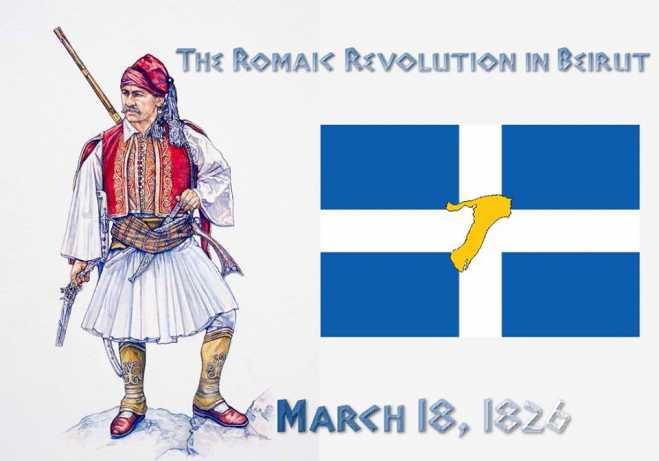 Exactly 193 years ago, on March 18th, 1826 a small group of brave Greek Revolutionaries, led by Vasos Mavrovouniotis attempted to liberate the city of Beirut, and thus spread the Hellenic Revolution to Ottoman-occupied Coele-Syria.

According to then-British Consul John Barker, stationed in Aleppo, the Revolutionaries were thwarted by a local Mufti and a hastily arranged defense force. Although initially repelled, the Greek heroes did manage to hold on to a small portion of the city near the seashore in an area inhabited by local Rûm.

During which they appealed to the Rûm “to rise up and join them”, and even sent an invitation to the chief of the local Druzes to also join the Revolution. Although unsuccessful, their heroic attempt to incite the Rûm of the Levant lives on as a testament that the Rûm of Europe and those of the Levant were and still are one people.

There are Syrian Cgristians who do not identify themselves as Arabs, nor as Syriac christians, but rather, believe, very resolutely, that they are descendants of Hellenistic and Byzantine greeks prevalent in the area since ancient times. They often refer to themselves as Antiochian Greeks, or as Rum.