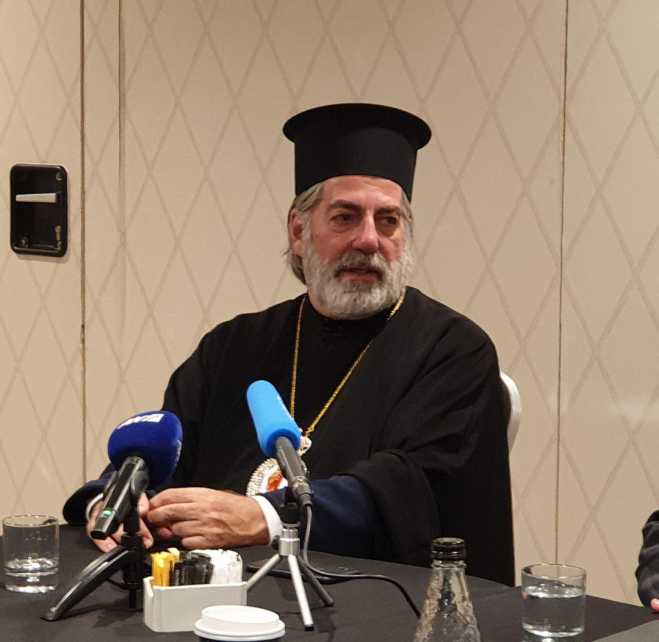 The newly elected Archbishop of Thyateira and Great Britain Nikitas has pledged to deal with any challenges arising once he officially takes up his new duties and to rejuvenate the Archdiocese with fresh ideas and actions.

The 64-year-old Tampa-born cleric was unanimously elected to the London-based post by the Holy Synod of the Ecumenical Patriarchate. Until then he was Metropolitan of the Dardanelles, based in the USA.

“I was quite surprised to receive a call at 2am by the Patriarch himself, telling me to wake up because I had been elected,” he disclosed.

During a first visit to the British capital ahead of his enthronement on 27 July, he admitted that he has no clear picture of the UK’s Greek and Greek Cypriot community or of London.

“Every problem has its solution. I aim to have a very good cooperation with the Archdiocese’s personnel, the clerics and all the members of our community,” he told a gathering of journalists, to whom he outlined his initial plans and thoughts.

Apart from establishing a good relationship and cooperation with all parties involved in his new duties, His Eminence Archbishop Nikitas has said that he would want to try and bring more young people to the UK’s Greek orthodox churches every Sunday. “I want to learn where the Greek cafes and restaurants are, so I can go and directly speak with them. The youth are not the future of the Church; they are the present.”

He also referred to plans for sustaining and enhancing the Greek schools of the community as well as establishing adult religious education, “so that the faithful really know what they believe in”.

Archbishop Nikitas added that the Archdiocese could even make a difference in the everyday working life of the diaspora, by linking businesses with Greek and Cypriot graduates in the UK, through a “job fair”.

In addition, he would like to create an “office for social justice” run by the Archdiocese, dealing with global issues such as human rights violations, modern slavery or human trafficking.

He also spoke of his “gratitude” to his predecessor Archbishop Gregorios, who at 91 and after 31 years of archpastoral duties in the UK and Ireland has stepped down due to health issues.