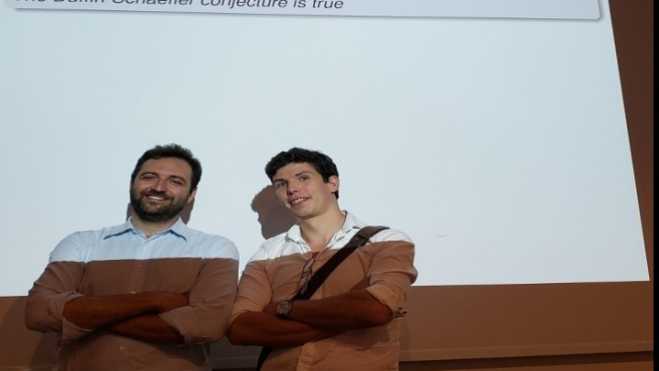 Dimitris Koukoulopoulos, associate professor of Mathematics at the University of Montreal, and, together with Oxford University research professor James Maynard, has been able to prove or solve, in the language of mathematics, the “ Duffin and Schaeffer conjecture”.

Koukoulopoulos, aged 35, was born in the northern Greek city of Kozani described his course and experience from the US universities of Illinoi and Princeton to the University of Montreal and remembered his studies in the school of Maths at Aristoteleio University of Thessaloniki and his school years in Kozani and spoke openly on the Greek universities and on all those he would like to change in the future in an interview with Athens-Macedonian News Agency.

The “ Duffin-Schaeffer conjecture” expressed in 1941 by mathematicians R.J. Duffin and A.C. Schaeffer mentions the criteria we can set in order to approximate numbers if we exclude some denominators. The two mathematicians also introduced a detail that says that if we exclude some denominators, even a sparse subset of them, some numbers may never be approximated.

Koukoulopoulos says that in the “ Duffin-Schaeffer conjecture” there is a duality of a very sharp separation that states on the one hand that you have left a large margin so that with the denominators you have, you can approximate all the numbers, and on the other, if you were too ambitious and with the restrictions you put in, you couldn’t approximate any number. “ So there are these two worlds where we can get almost all the numbers in one and almost none in the other, but there is a simple criterion that decides when we stumble upon each case.”

Around 1990, there were some results that approached the solving of the problem, but the conjecture remained unsolved until 2019, when it was fully proved by Dimitris Koukoulopoulos and James Maynard. The young mathematicians managed to solve one of the central problems in the field of “ metric diophantic approach” after 78 years.

In his interview to ANA, Koukoulopoulos explained that the problem belongs to the theory of number and is called "diophantic approach" in honour of Diophantes from Alexandria who was an ancient Greek mathematician and concerns approximating fractional numbers.

“Most numbers, such as the number π, which is a mathematical constant defined as the ratio of the circumference to the diameter of a circle (π = P / d) and equals 3, 14159265, occurs very often in Mathematics, in Physics. and if one sits down and writes the decimal numbers to give an approximation of that number, they will find that they never end. People can not but computers can work with such complex numbers and when we want to do things we want simpler approaches. If I write the decimal numbers of π and stop at 3.14 I get an approximation of the number with an error. I can write this number 3141/1000 which is a fraction approaching π, but in fact the ancient Greeks also knew that a very good approach of π using much smaller numbers is the fraction (22/7) that uses a denominator a lot smaller. Its denominator is only 7 while the denominator of the other fraction is 1000. The second fraction has much less complexity. And the question is if we can use denominators of a barrier up to 1 millionth, how good an approximation of a number can we get to? In such big questions, the ‘diophantic approach’ needs a simple fraction to find simple numbers approximations.”

Koukoulopoulos studied at a Greek public school and a public university. He graduated from the high school in Kozani and afterwards studied at the Aristotle University of Thessaloniki. He said that he liked Maths and speaks with respect for two of his professors "Athanassios Kozikopoulos was my professor at the high school in Kozani, a man with passion for maths and professor of Aristotle University Dimitris Betsakos who helped decide what to choose".

Asked if the Greek university offered him the necessary scientific education he was adamant. "When I went to USA I did not feel any disadvantage in comparison with my fellow students, I was fully prepared, because in Greece I had excellent teachers".

He said that the brain drain phenomenon a huge problem for Greece and believes that this course must be reversed immediately and some of the scientists that left to return to the country.