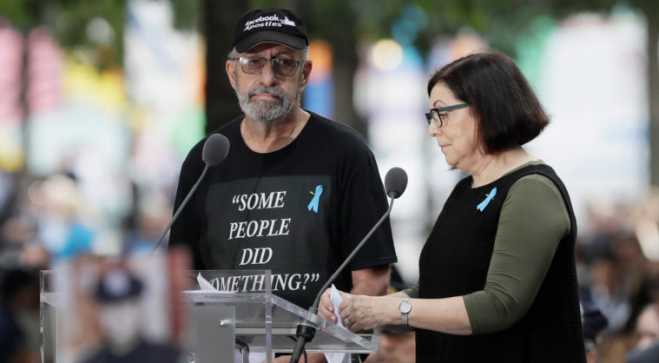 People who were too young on 9/11 to even remember their lost loved ones, and others for whom the grief is still raw, paid tribute with wreath-layings and the solemn roll call of the dead Wednesday as America marked the 18th anniversary of the worst terror attack on U.S. soil.

After reading victims’ names, Greek-American Nicholas Haros Jr. used his turn at the podium to tear into Democratic Rep. Ilhan Omar of Minnesota over her recent “Some people did something” reference to 9/11.

“Our constitutional freedoms were attacked, and our nation’s founding on Judeo-Christian values was attacked. That’s what ‘some people’ did. Got that now?” he said to applause.

Omar, one of the first Muslim women elected to Congress, has said she didn’t intend to minimize what happened on Sept. 11, and accused critics of taking her words out of context. She tweeted Wednesday that “September 11th was an attack on all of us.”

The dead included Muslims, as Zaheda Rahman underscored after reading names at ground zero. She called her uncle, Abul Chowdhury, a “proud Muslim-American man who lived his life with a carefree nature, a zeal for adventure and a tenacity which I emulate every single day.”