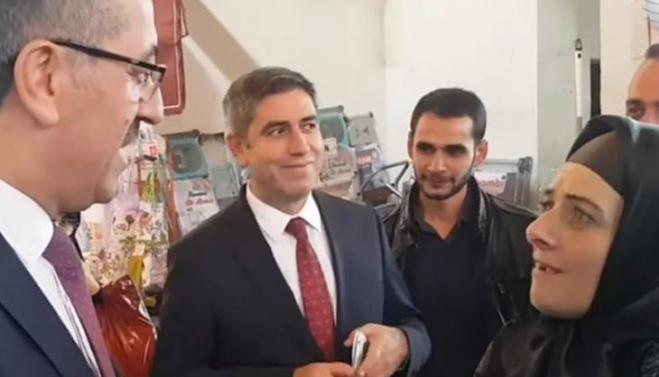 While out on a walk visiting local tradesmen, ruling Justice and Development Party (AKP) Mayor Hayrettin Güngör of the province of Kahramanmaraş was filmed as he told a woman “we made you Muslim” after learning that she was from the province of Trabzon, according to local news reports on Friday.

The woman acted with surprise to Güngör’s remark, replying “what do you mean by that?” The likely implication is that the comment stemmed from the fact that the woman was from Trabzon, which along with other provinces in the Black Sea region was historically home to a large population of Greek Orthodox Christians.

To this day, there are several thousand people living in the area that still speak the Pontic Greek dialect. Though they identify as Muslims today, they have roots in the region’s historic Greek Orthodox community. “The mayor of Kahramanmaraş is an old friend of mine. Yesterday evening he said that he was sorry. He explained that he said something to a woman from Trabzon unexpectedly that went beyond its intent, and he apologized. He saw that he made a mistake, sometimes we make these kinds of mistakes as well,” Zorluoğlu said.

“You have to look at [one’s] intentions. I know that his intention was sincere. Maraş is our sister city and God willing during our tenure we will initiate a Trabzon Avenue and Maraş Avenue special project,” Zorluoğlu added, using the shortened and more commonly-used term for the province of Kahramanmaraş.