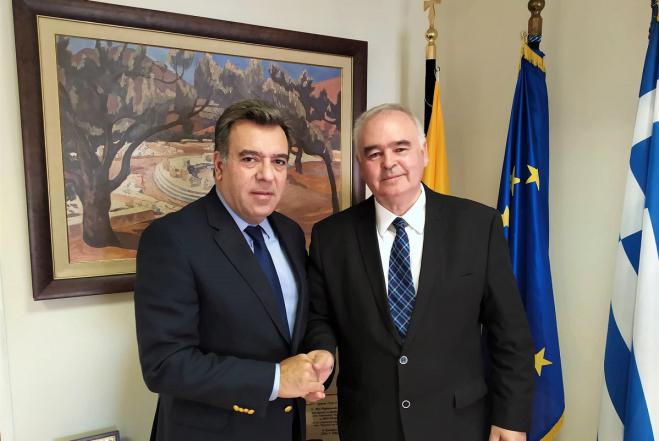 Deputy Tourism Minister Manos Konsolas signed a memorandum of cooperation with the Center for Hellenic Studies “Paideia” at the University of Connecticut with the aim to support its initiatives for the dissemination of the Greek language and culture.

“We support the dissemination of Greek education in America,” said Konsolas, who met with the head of Paideia, University of Connecticut Professor Ilias Tomazos.

Tomazos referred to Paideia’s activities, events and educational programs, which are now being offered in other US states as well as its study abroad program offering students the chance to visit Greece and take classes at Greek universities.

The minister praised the work of Paideia, and referred to the possibility of linking tourism programs offered in Greece with US university curricula.

Konsolas went on to pledge the ministry’s support of the commemorative events to take place in autumn 2020 marking the 2,500th anniversary of the Battle of Thermopylae, during which the Spartan Museum and the Open Greek Theater will be inaugurated.

The MoU, Konsolas said, “sets the stage for strengthening our cooperation. Our goal is the long-term cooperation and strengthening of our country’s ties with Greeks abroad to promote our values, Greek tourism, education, culture and history”.

Paideia initially started off as the Hellenic Society Paideia, a student organization established in 1974 at the University of Connecticut. It was later incorporated as an educational non-profit organization open to all. In 1984, it launched a Study Abroad Program with a course in Thessaloniki, expanding to now include academic courses in Athens, Thessaloniki, and Rhodes; summer courses, learning camps, and educator enrichment courses in Greece; and internships.