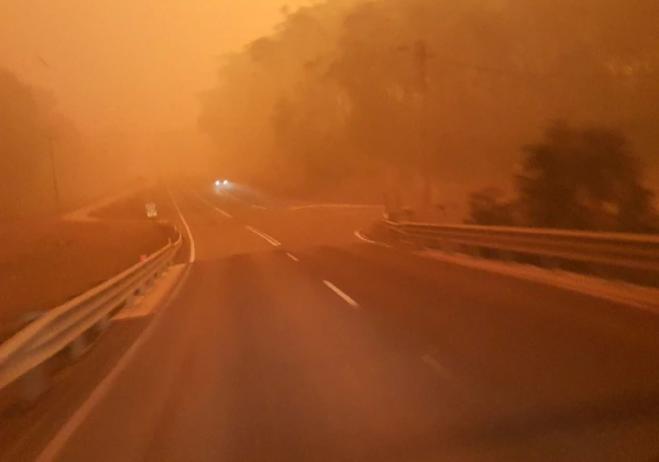 Nick Tsigolis, from Sydney, spents most of his time in Bateman's Bay where he used to have a holiday house. The recent fires, still raging in the area, turned the much-loved place he bought 28 years ago into a charred skeleton. He shared his story with SBS Greek.

Nick Tsigolis spoke to SBS Greek from the coastal town of Bateman's Bay where he is trapped since Boxing Day. He is one of thousands of residents and holiday makers who remain at the half-burned place as the roads remain closed.

Mr Tsigolis described the scary scenes before the fire hit the town: 'it was about 1pm and everything turned pitch black as if it was midnight'. The reality however, was much more terrifying for thousands of people including many young families.

'All around us there is this red- orange tinge' he says describing not just the approaching fire but also the current state of the area. 'When the fire came my house was gone within minutes' he said to SBS Greek.

Electricity and communications work intermittently, says Mr Tsigolis pointing out the disruption in electronic payments that leaves people without the basics in some cases. He said that the town is running low in food, water and other provisions.

'It took me twelve hours to fill two cars with petrol' he said pointing to the long queues outside of petrol stations. He said that there are people missing but he couldn't confirm the number. According to Mr Tsigolis it's uncertain when he'll be able to leave the town as the roads remain blocked.

The prime minister Scott Morrison announced today $20 for the lease of firefighting aircraft, the recall of 3,000 reservists and additional navy ship and ADF helicopters to assist the evacuations of areas and the transportation of firefighters.