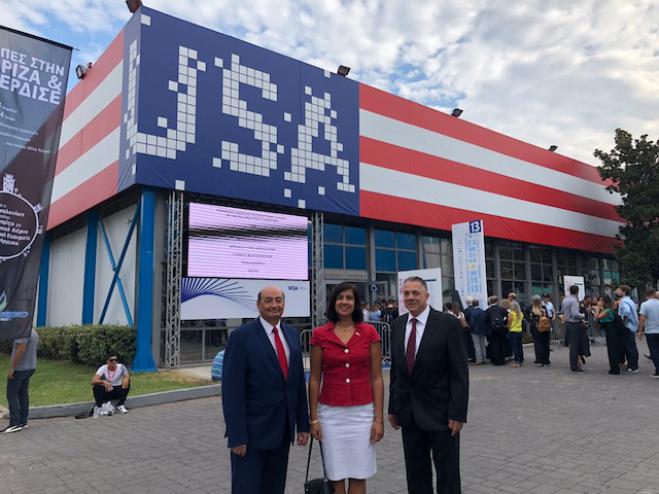 In recent years, much of America’s foreign policy focus has been on the Middle East, and with good reason. But as we continue to make strides for peace and stability around the globe, America must not turn a blind eye to southeastern Europe and the Mediterranean region.

A growing concern for that region has been a decades long backsliding on the part of the Turkish government. Everything from the illegal occupation of Cyprus to failing to respect the property rights of the Orthodox Church to overt military aggression has caused destabilization and regional tension. Unfortunately, our NATO ally Turkey has become increasingly hostile and undemocratic, whether it be its aggression in the waters surrounding Greek islands in violation of International law and illegal encroachments into Greek airspace, their purchase of the Russian made S-400 missile defense system, signing of the Turkey-Libya maritime deal, or the treatment of its own people and press. The U.S.-Turkey relationship has deteriorated so far that the United States has sanctioned Turkish officials and held up sales of F-35 Fighter Jets.

This regional situation is complicated, but bringing Turkey back into the fold of western democracies is an essential task for this decade. One way to continue to pressure reform in the Turkish government is to build stronger relationships with other regional allies.

This month President Trump welcomed Greek Prime Minister Kyriakos Mitsotakis to the White House for a historic visit. Along with continuing to build a personal relationship with Greek leaders, President Trump signed language into law which ended the prohibition on arms sales to the Republic of Cyprus, authorized Foreign Military Financing for Greece, and built a stronger regional partnership between the United States, Greece, and Israel. As a fully functioning democracy and a member of the European Union, Greece continues to be an example of the direction countries should take for U.S. partnership.

As Greek-American legislators who have been active members of the World Hellenic Interparliamentary Association, an organization comprised of elected officials of Greek descent, we are pleased to see this proactive dialogue between the two nations. But this is only part of the comprehensive approach that will be required to generate meaningful change in Turkey.

It is worth noting that earlier this year, for the first time ever, the Israeli Defense Force made the stunning decision to add Turkey to its list of threats in compiling its annual national security assessment. That action came a few months after the U.S. House of Representatives passed the Protect Against Conflict by Turkey (PACT) Act, by an overwhelming vote of 403-16. It was a clear expression of concern that Turkey is a threat to regional security in the Easter Mediterranean and is a danger to allies such as Greece and Israel and our strategic partners in Cyprus.

We urge the U.S. Senate to follow suit in taking up this legislation and sending a unified message to Turkey – that the Erdogan regime’s continued acts of aggression and provocation will not be tolerated. The sanctions contained in this legislation are the only way to force Turkey to reconsider the belligerent and hostile path it has chosen to follow in the region.

The overwhelming bipartisan vote this measure received in the House should be a powerful reminder to every Senator that allowing Turkey to continue to play the role of a chaos agent in the Eastern Mediterranean is an unacceptable outcome for the security interests of the United States. There is too much at stake and American credibility demands a resolute approach that engages our allies and encourages Turkey to return to the community of nations that act in partnership with the United States to promote freedom and democracy.

State Assemblywoman Nicole Malliotakis (R-New York) and State Senator Lou Raptakis (D-Rhode Island) wrote the above commentary. They can be contacted at