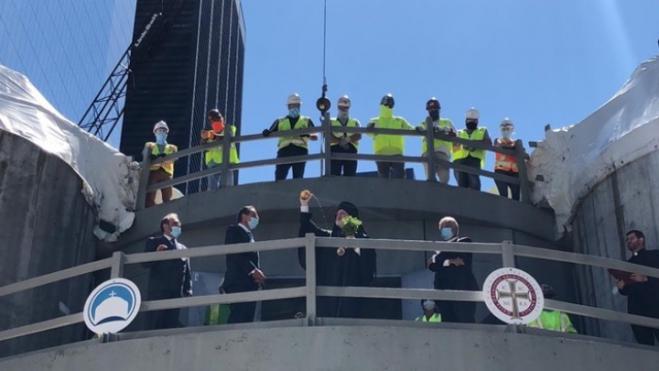 Archbishop Elpidophoros of America on Monday used sprigs of basil and holy water to bless the restart of construction works at the St. Nicholas Greek Orthodox Church that was buried under the collapsing Twin Towers on 9/11.

On Twitter, he wrote: "Grateful to restart construction at St. Nicholas at Ground Zero with New York Governor Andrew Cuomo. This national shrine will be a symbol of love, of reconciliation, and a sign of the ideals of religious liberty and freedom of conscience that never excludes, but only embraces."

In the presence of NY State, Greek community and Archdiocese officials, Elpidophoros stood at a balcony on the construction site and performed the blessing ceremony at the location where works were halted in 2017. The restart of the project is reportedly credited almost entirely to him for managing to mobilize sponsors and donors to raise the required funds in a short amount of time.
Archdiocese officials said they hope that the church will be completed by September 11, 2021 and reopened on the 20th anniversary of the terrorist attacks.

Saint Nicholas Church, named after the patron saint of sailors, began services in 1922 and was an important symbolic point of reference for Greek migrants, who in the early 20th century arrived at Ellis Island, the United States’ migrant reception center.