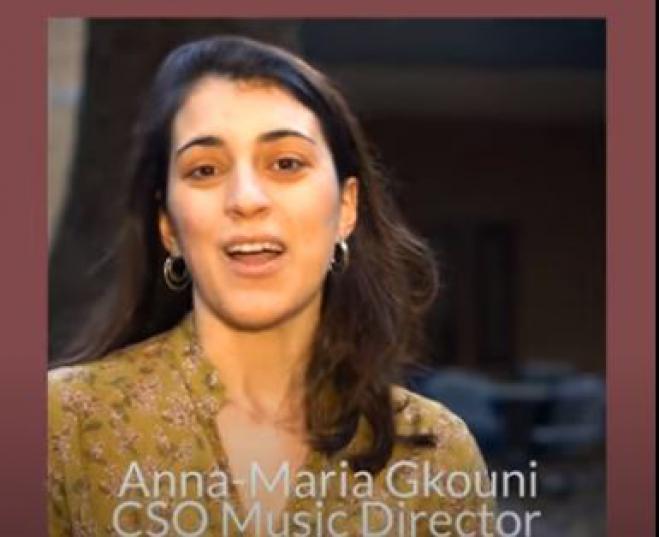 She is inspired by Theodoros Kourentzis, she admires Dimitris Mitropoulos and she may not have known as a child thatshe would become a conductor, however her parents' encouragement to learn the piano and her experience in the children's choir of the Third Program of ERT led her to the world of music.

Today, Anna-Maria Gkouni is the first female conductor and music director of the Conroe Symphony Orchestra in Texas, USA.

The rehearsals have not started yet, due to her health condition, but she is looking forward to grasping the baton and leading the ensemble to its first concert, if conditions allow, next summer. In fact, he had the opportunity to meet - by all means - the members of the orchestra (mainly volunteers) as she wanted to meet them in person before being in front of them on the podium.

The first musical steps and the children's choir of the Third Program
Anna-Maria Gkouni was born in 1990 in Athens and her first contact with music was at the age of 7, when her parents enrolled her in the conservatory. It was then that a world full of musical notes began to unfold in front of her and made her want to study at the music high school of Pallini and then at the Department of Music Studies of the Ionian University.

She explains that she was lucky that while he was still a child there was the children's choir of the Third Program on ERT and itmade her see the music world more seriously. "Every weekend, we spent 3-4 hours at ERT. And whenever the orchestra happened to have a rehearsal in the adjoining studios, it was a magical world: whenever I saw the orchestra I would peak through the doors to look at what was going on inside. The instruments, the conductors, the musicians… Somehow the seed was planted in me to become a conductor," she remembers.

As a student at the Ionian University, she chose the direction of the Orchestra Conductor under Professor Miltos Logiadis, whom she knew through his concerts and who had impressed her both for her musical work and for her personality. It was at the Department of Music Studies that she came in contact with piano teacher Lampis Vassiliadis, who encouraged her to continue her studies in the USA.

The ... break in Amorgos
After completing her master's degree, she returned to Greece and the summer vacation found her in Amorgos, where the tranquility of the island -suitable for study and research- and the good-natured people won her over immediately. The vacuum created by the departure of the music teacher from the island and the need of the people to express themselves with sounds led her to make the decision and stay in Amorgos for almost a year.

"I had a studio for 10-15 children, the children's choir and the adult choir. I saw people coming tired after work and a transformation was happening during the rehearsal and he left happy! That's how I realized that in a society, music binds people ", says the conductor, who after the break of Amorgos returned to the USA for her doctorate.

“To lead the Conroe Symphony Orchestra is a dream come true,” remarked Gkouni. “I am so grateful for the opportunity to conduct this exceptionally talented group of musicians. My greatest aspiration for the future is to create innovative shows that will combine multiple forms of art such as theater, which is my second passion. We are all very much looking forward to bringing music back to the city of Conroe.”

Dr. Don Hutson, who led the search for the new conductor, and served as the Music Director for 13 years said of Gkouni, “she’s precisely the fresh new talent that is needed to take the Conroe Symphony Orchestra in a bold new direction. As Board members our desire is to create experiential new works of art that help expand the reach of the orchestra. I believe that Anna-Maria will take us there,” Hutson concluded.