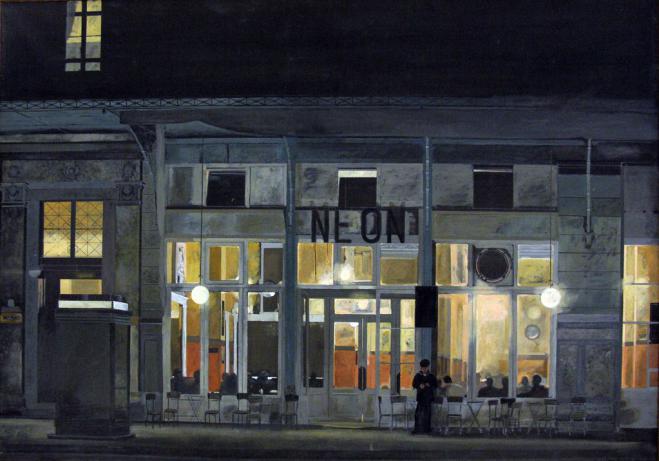 He is one of the most beloved Greek painters in his country, but abroad his work is not so well known. It is never too late, of course, as the work of Giannis Tsarouchis is presented for the first time in America and specifically in Chicago, in the very elegant museum "Wrightwood 659", which has been architecturally refurbished by Pritzker award-winner Tantao Anto.

More than two hundred works by Tsarouchis make up the exhibition "Dancing in real life" (until 31/7/21), which is taking place thanks to the co-organization between the Giannis Tsarouchis Foundation and the Alphawood Foundation in Chicago (which owns the Wrightwood 659 Museum).

It all started about three years ago, when during documenta 14 the co-founders of the museum in Chicago, Fred Aikener and Dan Whitaker, visited the headquarters of the Tsarouchis Foundation and the former residence of the painter in Maroussi. "They saw the exhibition presented in the context of documenta, they saw the books of Tsarouchis and his world and they told us that they liked it very much and that they were interested in showing his work.

The next year I was invited to Chicago to see the place, we kept in touch and finally decided to proceed with the exhibition explained to "Vima" newspaper Niki Gripari, president of the Tsarouchis Foundation and the painter's niece who is co-hosting the exhibition in Chicago together with Adam Szymczyk, the artistic director of documenta 14 in Athens and Kassel. "I think that the presence of his works abroad is something that would be of great interest to Tsarouchis. When works that had been sold abroad returned to Greece and everyone said to him: "how nice that the works are coming back!" he was upset. As for America, he had been to the country twice, in 1958. Once to meet Maria Callas, for whom he would prepare the costumes along with the sets for the play "Medea" by Luigi Cerubini, directed by Alexis Minotis, and the other for its premiere at the Dallas Civic Opera in Texas.

At the same time, Zeffirelli was staging two operas in the same theater, and met Tsarouchis, with whom he would collaborate later. However, he did not go to America again after this show. He was against air travel anyway. For the first time, as far as I can remember, Katina Paxinou put him on a plane and it was for this trip. I bring him to my mind telling the story that he was in Olympia and a gendarme came and said to him: "They are looking for you" and it was she who had been sent to manage to put him on the plane. However, the second time he went and came back by ship ".

"The beginning of a journey"

For his part, Adam Simcic said: "Tsarouchis was not just a Greek painter: he was an important artist of the 20th century and he deserves to be better known. And almost nothing is known about him in the US. Tsarouchis' work, irreconcilable, provocative and endlessly complex, must be shown outside Greece, including the USA, today more than ever. I hope the Wrightwood 659 exhibition will be the beginning of a journey, not the end point."

The aim of this exhibition is to make the existence of the Tsarouchis Museum known to an international public and to facilitate the further research and expansion of the archives and the collection of the Foundation. It is a huge and fascinating work for generations of scholars and art professionals, but also a great opportunity for the public, in Greece and internationally, to re-enter the mysterious and rich world of Giannis Tsarouchis, beyond the label of "great Greek artist" which characterizes him in his country".

The whole range of his work

So what will the visitor see in this exhibition which tries to present the whole range of his work? "From his first paintings, his studies of Greek popular culture, works inspired by Byzantine painting and those influenced by avant-garde art he experienced first hand during his first stay in Paris in 1935, the pioneering male nudes and portraits from the late 1930s, the works during the Occupation and the Civil War, but also his post-war work in its entirety: portraits of anonymous sailors, the military policemen, the men dancing zeibekiko, codified allegorical paintings such as the "Forgotten Guard", the "Departure", reaching until his stay in Athens until 1967, in Paris during the dictatorship and up to his mature period when he divided his time between the French capital and Athens. In these later years he created the Giannis Tsarouchis Foundation and donated to this his house in in Maroussi 1982," noted Mr. Szymczyk