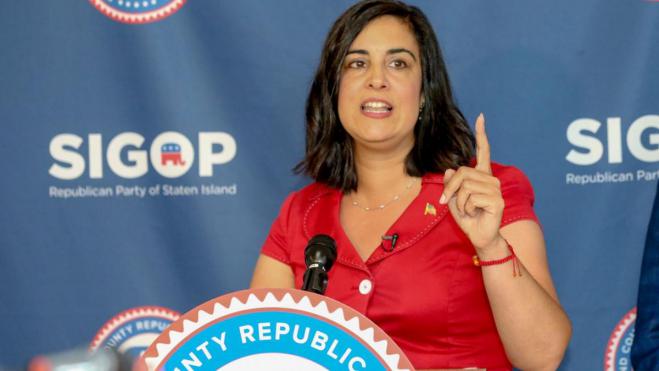 In light of recent anti-American, antisemitic, and bigoted statements made by Representative Ilhan Omar (MN-05), Congresswoman Nicole Malliotakis (NY-11) today led her Republican colleagues in sending the below letter to House Speaker Nancy Pelosi, House Majority Leader Steny Hoyer, and Representative Gregory Meeks (NY-05) in calling for the immediate removal of Omar from the House Committee on Foreign Affairs.

"We write with a profound sense of concern in light of anti-American, antisemitic, and bigoted statements made by our colleague, Representative Ilhan Omar (MN-05)," the letter states. "Given Representative Omar’s history of engaging in this type of conduct, House Democratic leadership must take immediate and meaningful action to remove her from the House Committee on Foreign Affairs. We consider anything less to be a form of complicity."

Representative Omar came under fire this week after likening the United States and Israel to terrorist organizations like Hamas and the Taliban during a House Foreign Affairs Committee hearing. Omar's comments drew bipartisan criticism after a group of 12 Jewish Democratic lawmakers called her statements "offensive" and demanded she "clarify" her words.

The letter continues: "Through her history of inflammatory, antisemitic, and subversive rhetoric, Representative Omar has repeatedly revealed her true beliefs which are counter to the example a Member of Congress must set. While we commend our Democratic colleagues, who have criticized Representative Omar for her “deep-seated prejudice,” her contention that these members engaged in harassment and the use of “Islamophobic tropes” reveals both a lack of contrition and the true nature of her character."