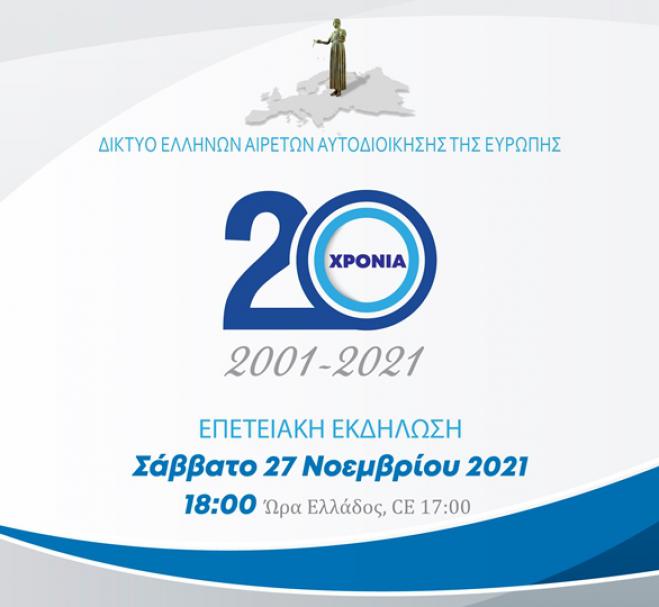 It was the autumn of 2001 when the Network of Greek Elected Local Authorities of Europe started its operation on the initiative of the Central Union of Greek Municipalities, the Ministry of Foreign Affairs-General Secretariat of Hellenes Abroad and the Council of Hellenes Abroad, with the support of the Greek Parliament.

The Network celebrates 20 years from its establishment on Saturday 27 November 2021, at 18.00 Greek time (CE 17.00), through a flashback honoring those who contributed to its creation, setting new goals and moving forward with new partnerships with its expansion worldwide . It greets its old presidents, its old members and executives, the people who helped it gat its start from their institutional positions but also the new representatives of the bodies involved in its operation, to share everything that happened in these 20 years, in good and more difficult times for Greece and Europe!

The Network of Greek Elected Local Authorities of Europe, is an institution with its members, European citizens of Greek origin living outside Greece, who are elected and are active in the local or regional authorities and administrations of their places of residence, and actively participate in more than 400 Elected Local Government, from almost all the countries of the European Continent.

Through its daily operation, it is an additional venue for dialogue and initiative, to strengthen and support the actions of the Greek Diaspora and the Local Government, in Europe and beyond.

Due to the ongoing pandemic the event will take place on the On-Line platform ZOOM.