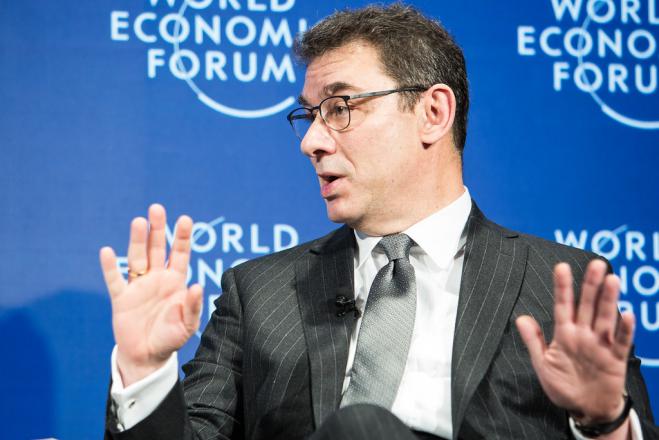 An alarm has been sounded all over the world for the Omicron variant. Experts believe that it is a matter of time before it prevails and stress how important vaccination is.

The CEO of Pfizer, Albert Bourla, was invited on Thursday night (16/12) to "Enopios Enopio" television program and spoke about the evolution of the pandemic while revealing that a special vaccine for Omicron and a pill for the coronavirus is coming.

At the same time, he referred to his professional career and explained how from the Veterinary School of Thessaloniki he found himself CEO of the top American colossus.

"The pill will be ready in the spring and will be for the patients with coronavirus and not to prevent them from getting sick. Of those out of ten, only one may need to go to the hospital, unlike today. We will have 80 million treatments available. Each treatment will be for five days and will have one pill in the morning and one in the evening. "The cost will be much lower than monoclonal treatments but higher than the vaccine," Mr Burla said.

He also noted that Pfizer has started making a vaccine for Omicron, however, although it will be ready in March, it may not need to be available, as the current vaccines are strong against the new variant of the coronavirus.

However, Omicron needs attention as evidence says it will prevail.

"I'm not sure, but it 's most likely that Omicron will prevail. It's quite complicated and we will have to wait and see what happens. There is no way the third dose will not be effective, but I do not know if it will be 95% effective. "I do not think it is below 75%," he said.

For the third installment, he stressed: "I have done the third installment. Early laboratory research and studies have shown encouraging results. The first two doses do not protect well against Omicron. They protect very well from the Delta. The third dose had a huge increase in protection. "It was almost the same protection as the two doses of the original virus."

Albert Bourla from Thessaloniki. How he went from the Veterinary School to Pfizer?

"I was going for medical school, it could have been my career either as a doctor or a veterinarian. Having completed a veterinary degree with a doctorate was rare then. I then wanted to pursue an academic career, I joined the company not of my own free will, but with the encouragement and persistence of a third party. I went as an intern for a while, but I fell in love with the job in the first months. I was impressed by the dynamism of the private sector. I have been in the company for 28 years. The three in Greece and the 25 abroad. The pace was fast, I had to live in nine different cities in five countries. "The biggest gift from these constant travels I gave my children was the opportunity to see new cultures, the world is big, different," he revealed.

Regarding the proposal to work in New York and in the leading nucleus of the colossus, he said: "America was one of the five countries I lived in. I went for the first time in 2001 after Belgium and Poland, I was involved in the marketing of veterinary products in the American market, in charge of the portfolio. In 2006 we went to Paris, where I was in charge of Europe and the rest of the world except America and in 2011 I returned to the position of product manager. I never saw the position of CEO, it did not come unexpectedly of course, it seemed that it was going that way in recent years, but personally, I never looked for the next position, I never applied for another job in the company. In 2014 I joined the executive of Pfizer.

As CEO I do not work more than before, I have my wife who supports me every step of the way, the responsibilities are different now. Responsibilities as CEO have to do with you. In the other positions there was the managing director, who made the final supervision and any corrections. Now there is no possibility of correction by someone else, there is no one above, hence I have noticed that I am now becoming more conservative. But my friends tell me that this is not called conservatism, but it is the vision you have, the radicalism you have to bring."

Finally, he did not fail to mention his love for his hometown, Thessaloniki. "When I retire I will divide my time between Greece and America. I have Greece inside me. I listen to Hatzidakis, I read Greek newspapers every day and I get angry when I hear something bad about Greece. Every year I want to get better. My dream is for my children to be happy," he concluded.