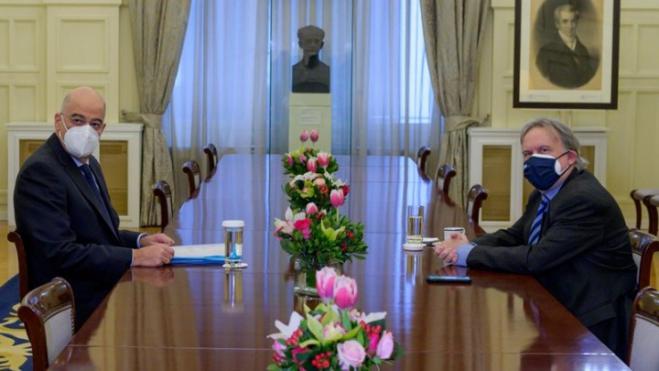 Foreign Affairs Minister Nikos Dendias briefed Greek party represenatives on Tuesday on his visits to Mariupol (Mariupolis) and Sartana in Ukraine on Monday.

While in the Ukraine the minister had paid a visit to the Special Monitoring Mission of the Organization for Security & Cooperation in Europe in Mariupol, and met with the Greek communities in the same city and in Sartana. Both communities number 120,000 diaspora Greeks.

Dendias told the parties that "Greece has supported and still supports the deescalation of tension in the region and maintains communication channels with all involved parties." He said that a few days ago he spoke by phone with his Russian counterpart Sergey Lavrov. As he underlined, "Russia is an inseparable part of European security, and we always believe that for deescalation to occur, dialogue is essential."

Speaking of the Greek community in Ukraine, the Foreign minister said that "besides issues of security, it also faces serious issues with welfare and living," and reiterated that "the Greek state will help as much as possible in resolving these issues."

The minister also briefed parties on developments in the East Mediterranean and the Balkans, the development of multi-country collaborations in the region, and the diplomatic opening toward Africa, as well as plans for diplomatic contacts in Asian, Australian, and South American countries, among others.

"We are particularly happy with the fact that the European Commission announced last week that it will fund the Euro-Asia Interconnector - the connections of power grids of Greece, Cyprus, and Israel - through its announcement that was warmly welcomed in the United States," FM Dendias noted.