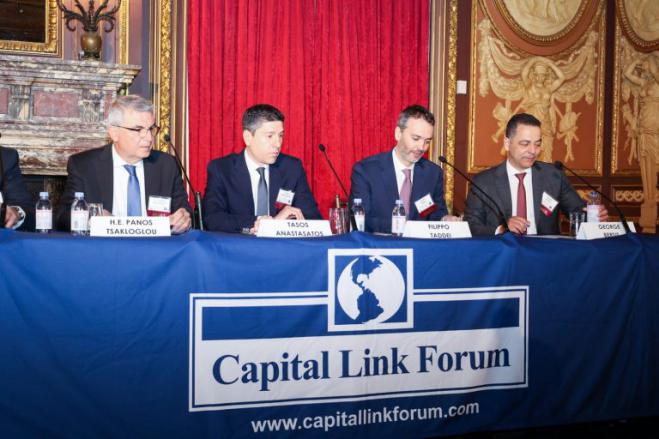 With the central theme "A New Era - A New Direction for Greece", the 23rd Annual Hellenic Investment Conference was held with great success and excellent participation on Monday 11 April , 2022 with physical presence, in collaboration with the New York Stock Exchange, major International Banks and Organizations, with the support of Top Sponsors CITI & Tsakos Energy Navigation (TEN) Ltd. as well as with the strong support of the Greek business and financial community.

Having become an institution for the presentation of investment opportunities emerging in Greece, the conference brought together prominent figures from the business world, as it brought together a number of international investors, businessmen, bank executives, technocrats, political officials from Greece, Europe and America and representatives of major Greek and European Organizations.

The Prime Minister, Kyriakos Mitsotakis, addressed the following message of the government to the investors through video, emphasizing that "the recovery of the Greek economy in 2021 was even more dynamic than expected, and will exceed the pre-pandemic levels by the end of the year. Unemployment has also fallen faster than in other countries, falling below pre-pandemic levels to its lowest level since 2010.

The agenda, topics and structure of the Conference through 14 thematic Units and with the participation of 64 High Level Speakers, were designed to inform and meet the requirements of international investors by combining the Greek and American government perspective, with the perspective private sector executives, international financiers and investors. The conference was held at a critical juncture, as the impact of the pandemic is still being felt in the global economy.

Supply chain problems, inflation trends and increases in energy tariffs are challenges that remain at the forefront. At the same time, the new war in Ukraine has redrawn the geopolitical and energy map of Europe, intensifying global uncertainty.

"A New Era - A New Direction For Greece": In the light of these new challenges, Greece has managed to shape a new reality that creates promising prospects for the future. Indicatively, "Modernization and Investment" is at the heart of the National Plan for Recovery and Sustainability "Greece 2.0", the largest plan prepared in modern Greek history aiming to change the economic model, turning it into competitive and extroverted with digital and efficient background. The amount of around € 31 billion to be disbursed from the Recovery and Sustainability Fund - in addition to the funds from the European Development Programs and which are included in the new European Union budget for the period 2021-2027, may be necessary for Greece a pole of attraction for significant and additional foreign investments.

The Minister of Finance, Mr. Christos Staikouras, as the Keynote Speaker of the Conference, presented the development economic policy and the goals of the Government, while the topic of his intervention was "Accelerating Growth - Government Economic Policy & Objectives".

The Minister of Development and Investment Mr. Adonis Georgiadis, and the Chairman & Chief Executive Officer of PFIZER, Dr. Albert Bourla were the keynote speakers at the formal luncheon.

As every year, the Conference provided foreign investors with the opportunity to network through a variety of "oneto-one meetings" with Institutional Investors representing large foreign funds with investment interest in Greece, with listed and non-listed companies, as well as with members of its delegation. Greek government.

In cooperation with the investment banks that support the Conference, group sessions were organized for the main ministers of the government:
The Minister of Finance, Mr. Christos Staikouras, accompanied by Mr. Dimitrios Tsakonas, General Manager - Management Organization

Expatriate and International Media
The representatives of the Government and the companies that participated in the Conference spoke with the Expatriate Media of New York that covered all the sections as well as with the international Media that attended the Conference such as: Financial Times, Wall Street Journal, Bloomberg, YAHOO Finance , Reuters, New York Times, Tradewinds.

Award ceremony
The Conference closed with a formal dinner during which Mr. Alex Fotakidis, Partner & Head of Greece - CVC Capital Partners, was honored with the "2021 Capital Link Hellenic Leadership Award", for his outstanding contribution to Greece.

The Ambassador of Greece to the USA, Mrs. Alexandra Papadopoulou, gave the Introductory Speech / Welcome. The keynote address was delivered by Maria Olson, Office Director-Office of Southern European Affairs, Bureau of European and Eurasian Affairs - U.S. Department of State.

Dinner was sponsored by EY