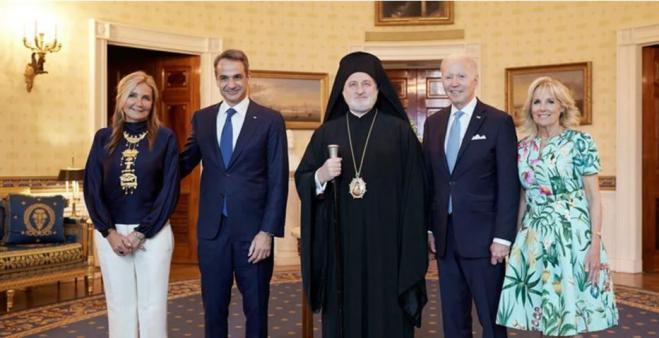 In an article on the new landscape in Greek-American relations, Greek leading daily "To Vima" lauded the rols of the Greek Diaspora.

According to the newspaper and journalist Angelos Al. Athanasopoulos:

"The group that helped deliver the emblematic - despite criticism at home - speech before the joint meeting of the House of Representatives and the Senate at the Capitol on May 16 (bearing the personal seal of the Prime Minister, who reportedly confided in 2-3 persons of his absolute trust), but also to overcome the obstacles raised by various persons of the American side had at its core key figures of the Greek-American community: people proven and successful, who moved quietly, picked up the phone when needed and spoke to key figures when the need arose.

After the initial "ice" that was de facto imposed by the pandemic, the operation regained momentum last fall. Some initial contacts by the Prime Minister, away from the limelight, took place last September on the sidelines of the UN General Assembly in New York in order to highlight to his interlocutors his thoughts and vision for the visit. Throughout the process, a man who helped catalyze was Alexandros Karloutsos. A person with an excellent knowledge of human geography in the American centers of power, better known in political, business and journalistic circles as "father Alex" has been the general director of the Archdiocese of America for the last 30 years. He was the one who, when necessary, picked up the phone and spoke with President Biden and people close to him to overcome difficulties - and not just bureaucratic - that had arisen and involved people who did not view the Mitsotakis visit very positively, even when the relevant dates had been given by the White House for his arrival in Washington.

They were the same people who initially thought there would be no… problem with Turkish Foreign Minister Mevlüt Çavuşoλουlu being in Washington on the same days as Mr Mitsotakis to meet with Anthony Blinken - before the meeting was finally moved to New York, where the two men on the occasion of an immigration forum. But Joe Biden wanted the visit to take place and his order was catalytic. As for how much he wanted it, a look at the warm words he said at the reception that followed the meeting with Mr. Mitsotakis, on the afternoon of Monday, May 16, speak for themselves."

The article also noted the role of other key Greek Americans:

"It was not only Karloutsos who played a key role in the visit. Real estate mogul George Markus, Angelos Tsakopoulos (and his daughter and California vice-governor Eleni Tsakopoulou-Kounalaki, who maintains a personal friendship with Vice President Kamala Harris), Andy Manatos, a close friend and generous financier , Dennis Mills, formed, according to the information of "Vima" , a Greek-American "dream team", a core of people who, especially after November 2021, pressed persistently and effectively to bend the resistance. The "investment" that the Greek side has made in recent years in Congress has also proved to be very important. The powerful chairman of the Senate Foreign Relations Committee, Robert Menendez, "threw his weight" behind the visit, as did MP Gus Bilirakis, but also Eddy Zemenidis, head of the Hellenic American Leadership Council (HALC)."