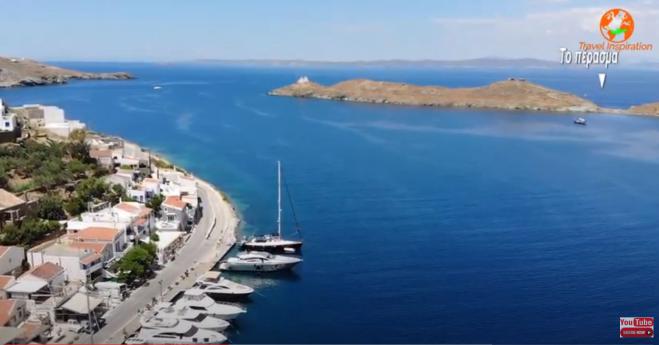 In the Aegean Sea and a short distance from the shores of Lavrio is Kea, also known as Tzia, a name given to it by the inhabitants of the island and which most often prevails over the former. It is the northernmost island of the western Cyclades, but also the closest to Attica, just 16 nautical miles from Sounio. Marinos Charalampopoulos once again graces us with a beautiful video of Tzia.

To the north of the island is one of the largest natural harbors in the Mediterranean, the bay of Agios Nikolaos with the homonymous lighthouse on the left of the entrance welcoming all incoming guests. And it may be built on the ruins of the temple of Poseidon, but nowadays it stands all white and looks like a white stone fortress, knowing its importance and antiquity, being one of the two oldest lighthouses in the Greek network.

In the "bowels" of the bay, from right to left,visitors will first meet the main port of the island, Korissia or Livadi, swim in Gialiskari with the golden sand and wander in Vourkari, a picturesque settlement, a meeting point of sailors, the most cosmopolitan part of the island.

But as visitors approach the lighthouse, there is a point that should everyone should definitely dote on. And if one is lucky and the weather is good, one should stay for a while to smell the air of history that the Tziotes themselves will reveal to him in their conversations. It is the Strait of Kokka, a narrow strip of land, where looking at it from a distance it looks like the tail of a lazy lying down camel, on the other end of which, like a huge eye that watches everyone, stands the lighthouse.

In this narrow passage, now called "the Strait of Lambros Katsonis", in the spring of 1790, the legendary sea warrior, knight of the Russian Order of St. George, Lambros Katsonis, taking advantage of its flatness, attempted and successfully crossed his ship. into the "open" sea…

Born in 1752 in Livadia, Lambros Katsonis took part at a very young age in the Orlofika rebellion and the Crimean War, having already been enlisted as an officer in the Greek corps of the Russian army since 1774. Thirteen years later, with the start of the Russo-Turkish war, he successfully launched attacks on the Turks in the Ionian Sea and later in the Aegean Sea. In the spring of 1790, outraged by his actions, the Turks sent their fleet to Tzia with an order to destroy his fortress. After a fight, Lambros Katsonis found shelter in the bay of Agios Nikolaos. The Turks remained at the entrance of the port, waiting for dawn to catch him. However, with the help of the islanders, Katsonis manages to find himself in the open sea from this narrow strip of land, using tree trunks smeared with pork fat.

The dawn of the next day, found the Turks enraged, realizing the feat of this legendary naval warrior. At the same time, the Turkish admiral ordered his men to disembark on the island and destroy it completely. Many Tziotes died tragically, while houses, churches and monasteries were torched by the Turks.

Lambros Katsonis died at the age of 52, but his achievements changed the course of Greek history forever ...

So when the natural beauty of a place is combined with the incredible, but true events of the history of Greece, then the result can be nothing but magical !!!