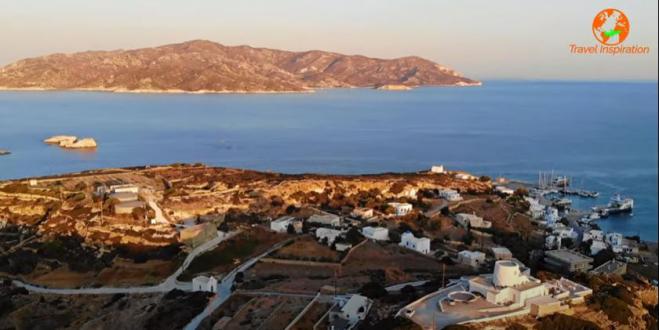 Looking at the nautical chart of Greece, in the southwestern Aegean, northeast of Milos, there is an off-white "dot" that is as if chalked on a blackboard so neatly and beautifully as if a small child's hand could paint in front of a teacher. Marinos Charlampopoulos gives us a glimpse of its beauty.

And its color may be off-white due to its special rock, having even given its name to the chalk known to all of us, but in the past it was called Arziantiera, meaning "Silver". It had this name from the Middle Ages until the years of the Greek Revolution and was a Latin word of Venetian origin that was given because of the silver-colored rocks in the south of the island. However, according to tradition, Kimolos owes its name to its first mythical inhabitant, Kimolos, wife of Sidi, daughter of Taurus, while in the Middle Ages, the island was called "Echidnousa", meaning the island of Echidnas (vipers), which even today abound on the island.

It is an island with a long history through the centuries. For the sake of truth, in the area of ​​Ellinika, which in antiquity was one of the two ports of the island, finds have been excavated from the Mycenaean and Hellenistic eras, as well as from the Geometric and Archaic years, while in the second and main port , that of Psathi, there are carved neocles, the well-known "wires".

Like all the Cyclades, Kimolos suffered a lot from the pirate raids of the Mediterranean, but also later, when it was occupied by both the Turks and the Russians. In 1830 it managed to integrate into the newly formed Greek state. During the dictatorship, Kimolos became a place of exile for dissidents, mainly women, with many important intellectuals of the time among them.

Kimolos is a special and distinct island, known for its tranquility and simplicity. Its capital, the Village as the locals call it, is a beautiful settlement with wonderful views and whitewashed cobbled streets, with typical Cycladic architecture. The small cafes of the village with the imaginative colors between the squares and the well-kept houses of the locals, exude a relaxed atmosphere that immediately wins you over. As for the beautiful beaches with crystal clear turquoise waters and volcanic rocky landscapes, combined with its hot springs, make it an ideal summer destination offered for days of calm, relaxation and carefree.

And if you are lucky, you may meet the golden owl, a rare species of prey that lives on the island or even the Mediterranean seal Monachus Monachus, which is one of the two remaining species of monk seals in the seal family.