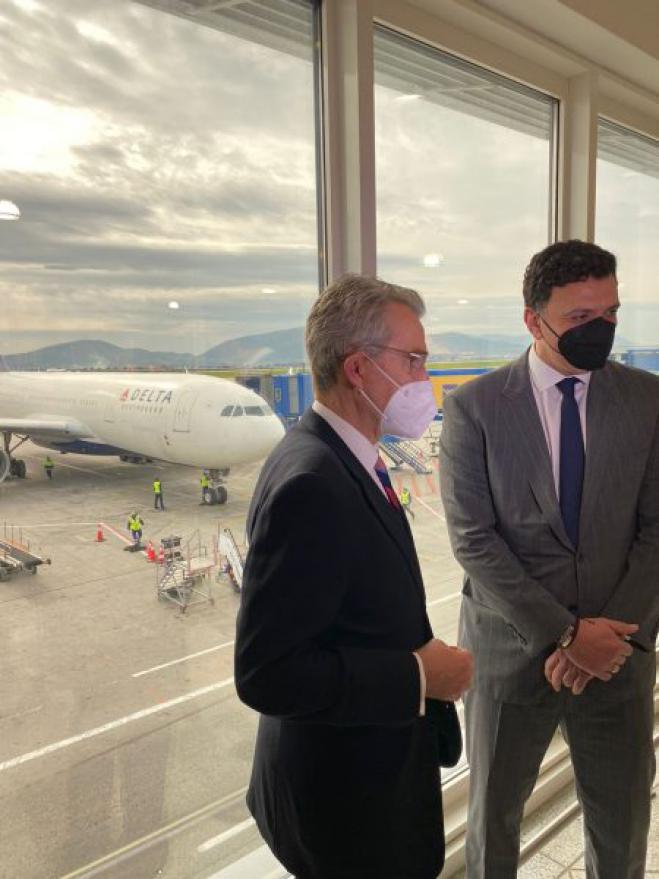 A vote of confidence for Greek tourism is the - earlier than any other year - the first for the season direct arrival at "El. Venizelos" flight of an American airline from the USA, said the Minister of Tourism Vassilis Kikilias.

The flight took off from New York John F. Kennedy International Airport and was operated by Delta.

The minister, who welcomed the flight with US Ambassador to Athens Geoffrey Pyatt, said: "We welcome the first direct US flight to Eleftherios Venizelos Airport." We are very happy that it is very, very early this year and it is a vote of confidence for the country and Greek Tourism ".

The minister pointed out that nine direct flights are planned daily from the US to Greece, "which shows how important is the effort we make - and will be successful - to bring tourists from America to Greece" and thanked the US ambassador for his support.

For his part, Mr. Pyatt stressed that "this will be just the beginning. "We will have a record number of direct flights from the United States this year."

The American ambassador congratulated the Minister of Tourism, but also the American airline for the first American flight of this tourist year, "for which", as he said, "we have extremely high expectations".

"Greece," he stressed, "has so much to offer. "Spring is a fantastic time of year here, and I'm really excited to have our first direct US flight, earlier than ever."

Regarding the war in Ukraine, Mr. Pyatt addressed Vassilis Kikilias and said: "I also want to say, Mr. Minister, as we meet in the light of the terrible developments in Ukraine, how much I appreciate your clear statements about the Russian invasion of Ukraine, but also for the initiatives of the Ministry of Tourism for jobs in the tourism sector, for the Ukrainian people displaced by the violence in their country.

"So it's great that we have some good news today that we are focusing on and I am very optimistic that we will see a record number of American tourists coming here to enjoy all that Greece has to offer over the next eight, nine months."