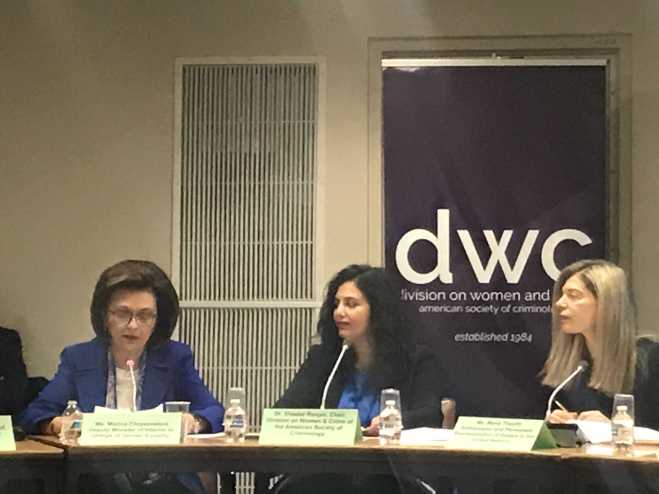 UNITED NATIONS, NEW YORK. The Deputy Minister of Interior in charge of Gender Equality, Marina Chrysoveloni, spoke at "The Safety of Women: Penal Mediation in Greek Domestic Violence Legislation" conference on March 12, 2019 at the United Headquarters in New York, USA. The event was organized by the Permanent Mission of Greece to the United Nations and the American Society of Criminology, Division of Women and Crime.

The Deputy Minister highlighted that, "Since the 1970s, gender equality has constituted a distinct aspect of public policy at international and European level – and in Greece, since 1981, with the establishment of the General Secretariat for Gender Equality as the competent governmental body for gender equality policies".

She explained that the Greek Constitution recognized the necessity for the State to take measures to promote substantive equality between men and women (according to Article 116, par. 2).

Chrysoveloni said that the multidimensional phenomenon of violence against women, the systematic violation of human rights, had been an obstacle to any attempt of development, peace and gender equality in all societies.

She mentioned that although most societies forbid violence, in reality the phenomenon was often covered up or tolerated: "Only in Europe, more than 1/3 of women have been victims of violence at some point in their lives, mainly physical and sexual, and according to the World Health Organization, the cases of violence against women outnumber the 35% of women population worldwide."

She added that the prevention and combating of violence against women in Greece has traditionally been a top priority for the General Secretariat for Gender Equality of the Ministry of Interior.

However, the Deputy Minister explained that the current National Action Plan for Gender Equality 2016-2020, incorporated the previous comprehensive and coherent "National Program on Preventing and Combating Violence against Women" implemented since 2010.

She said that the Program referred to all forms of gender-based violence, was co-funded by the E.U. and included a network of 62 structures, including the nationwide low-cost bilingual SOS telephone helpline 15900 and the relevant e-mail address (in Greek and English), operating 24 hours/day and 365 days/year, as well as 40 Counseling Centers and 21 shelters all over Greece, proving services free of charge and including psychosocial support, legal and labour counseling, emergency shelter and, where necessary, legal aid in cooperation with local Bar Associations.

"Our goal is to empower women victims of violence and help them regain self-esteem, thus enabling them to make sound decisions for their future, and ultimately gain independence in their personal and professional lives", the Deputy Minister said.

She added that the target group of all services have been expanded to include in addition to women victims of gender-based violence, women victims of multiple discrimination (refugees, single parents, Roma etc.).

Since the launch of the Program, Chrysoveloni said that approximately 25,000 women had been served in the Counseling Centers and about 1,500 women and children had been accommodated in the Shelters.

As she further explained, over the last five years the trend was upward for all structures (with a small decrease in 2018), explaining that the increase could be partially explained by the exacerbation of the economic crisis (especially for the period 2012-2015 the increase was almost five times higher): "...The launching of the public awareness campaigns of our national Program on Violence against Women also shed light to the issue. Thereafter, women began to realize the problem, to examine their options and gradually the number of incident reports in our structures started to rise".

Regarding the legislation on gender-based violence, she mentioned that in 2018, Greece ratified by national Law the Council of Europe's Istanbul Convention on preventing and combating violence against women and domestic violence: "Introducing amendments to the existing legal framework [like the existing law on domestic violence and the greek Penal Code), the new law underlines the obligation of the state to fully address gender-based violence in all its forms and to take measures to prevent violence against women, protect its victims and prosecute the perpetrators".

She stressed that the Convention emphasized "on prevention of gender-based violence through specialized education and awareness programs and specialized measures are envisaged to protect women-victims of violence in order to prevent their secondary victimization, to protect children witnesses of abuse and to establish a mechanism for the monitoring of its implementation".

As Chrysoveloni announced, "a bill on Substantive Gender Equality and on combating gender-based violence was ready to be submitted to the Hellenic Parliament and become national law: "It is the first attempt in Greece of drafting a horizontal bill, aiming at the creation of all those circumstances that could lead to the achievement of substantive gender equality and the elimination of gender inequalities in all sectors of public, social and economic life".

"With synergies, coordinated and cross-sectoral action of public and non-governmental organizations, national action plans with a holistic approach, awareness raising campaigns and visibility of the problem not only in mass media but also in social media, interventions in education modules and last but not least with continuous training of field professionals", Chrysoveloni concluded. 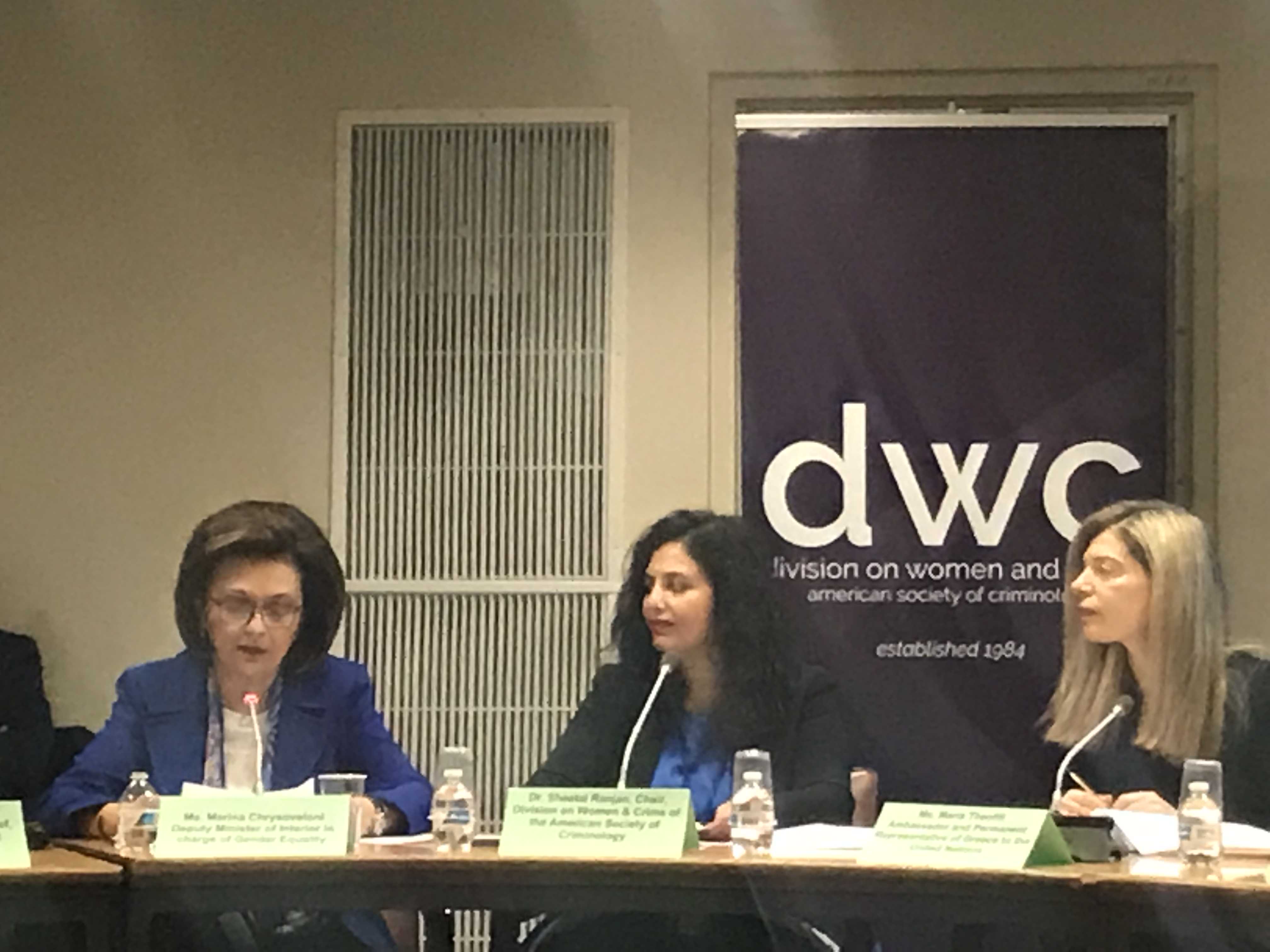 (From the left) The Greek Deputy Minister of Interior in charge of Gender Equality, Marina Chrysoveloni, the Chair of the Division of Women and Crime of the American Society of Criminology and Associate Professor of William Paterson University, Sheetal Renjan, and the Ambassador and Permanent Representative of Greece to the UN, Maria Theofili. Photo credit: Despina Afentouli.