The aid provided by Las Vegas restaurants after the Sunday night massacre there was invaluable as  they did what they could to help the injured and their families by sharing their food.

Among these taverns was one belonging to Hellenic interests. The Greek restaurant Meraki, known in Las Vegas for its Greek cuisine, Mediterranean delicacies and, of course, the traditional souvlaki, helped those who had been struck by the nightmare, offering them food.

Indeed, according to a Las Vegas local newspaper, the owners Nikos Georgoussis and Jerry Gourojan decided to make sandwiches for those who were transferred to the Spring Valley Hospital and to share them among those who spent the night there.

The restaurant may not have made its specialty, which is Baklava flavored ice cream, but "recruited" two well-known chefs in Las Vegas, award-winning Zoel Robbonson and the chef of the French restaurant Le Cirque, based in Manhattan .

Of note, of course, is the mobilization of many chefs in Las Vegas, who helped not only to cook but also to give blood. In particular, the owner of the Sparrow + Wolf restaurant, who saw the carnage at Spring Valley local hospital, mobilized restaurateurs and chefs through social media to help the injured, but also the local community that was not ready to manage so many injured.

The mobilization was unbelievable, as bakeries, restaurants and fast food esablishments undertook to feed those who contributed to this effort, such as policemen, victims' families, journalists, doctors, employees in blood banks, etc. The catering continues today, with the Greek restaurant having taken photos of the dozens of packages that will be given to those in need. 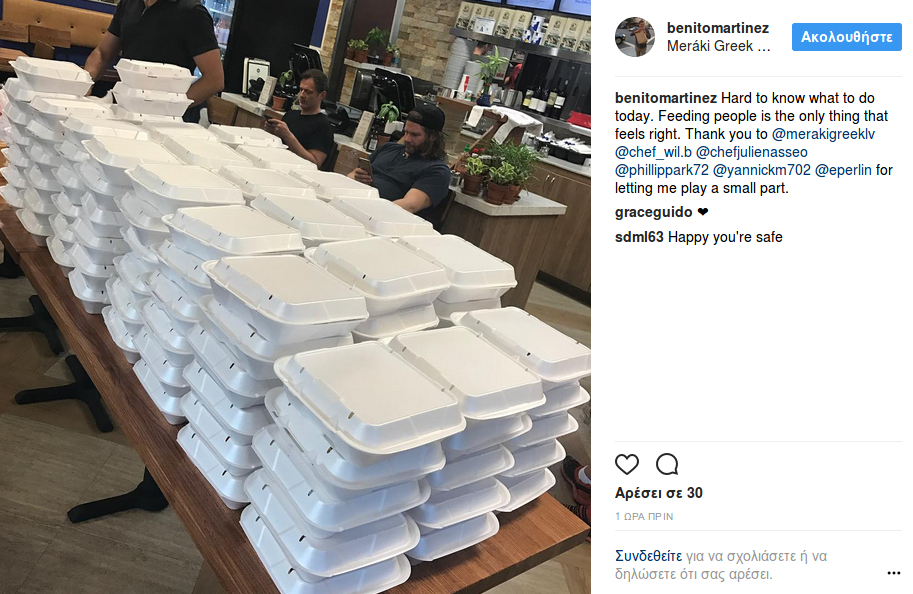