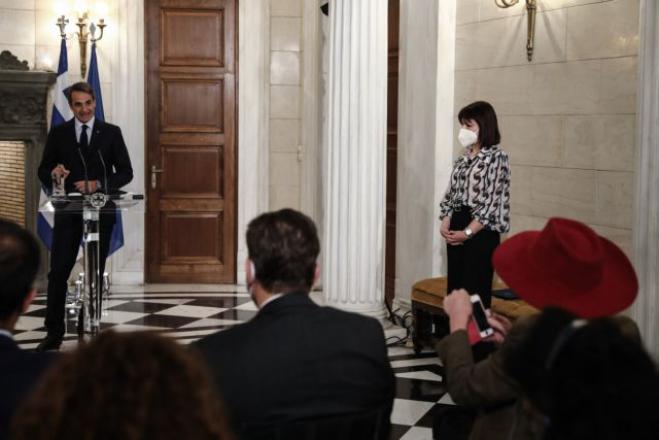 At a joint press conference, the Greek premier said they spoke extensively about the coronavirus pandemic and the measures to curtail the infections, particularly to avoid shutting down the economy again.

In a response to a Dutch journalist on the migration issue, Mitsotakis responded: "I know that in your country you can ask questions directly. I will not accept you insulting me in this office. I do not want you to criticize me with expressions and charges that are not supported by facts as far as the migration issue is concerned. We have saved thousands, 200 people were in danger of drowning south of Crete, and we are saving lives on a daily basis. At the same time, we are also blocking flows from Turkey and call on their coast guard to return them. So instead of blaming Greece, you should blame those who take advantage of human beings."

The Greek prime minister continued, "We have a very tough but very fair policy on the migration issue. A total of 50,000 people have arrived in Greece, of whom 10,000 were Afghanis who have received asylum. Have you ever been to Samos? You have not. You cannot come to this office to insult me. If you go to Samos, you will find a very good facility with healthy conditions, play spaces for children, and nothing related to what we had in the past. I  will not accept anyone shaking their finger at this government and criticizing me as well."

Speaking at the press conference, Rutte said the two discussed economic collaboration, investments and tourism, as well as the issue of Libya. He said they would discuss this further during a dinner to follow. Greece's borders are the borders of the European Union and they must be protected, he underlined, while adding that Europe must welcome a number of refugees, but those who cannot remain must return.

The Dutch PM also said that the royal family of the Netherlands will visit Greece in December.