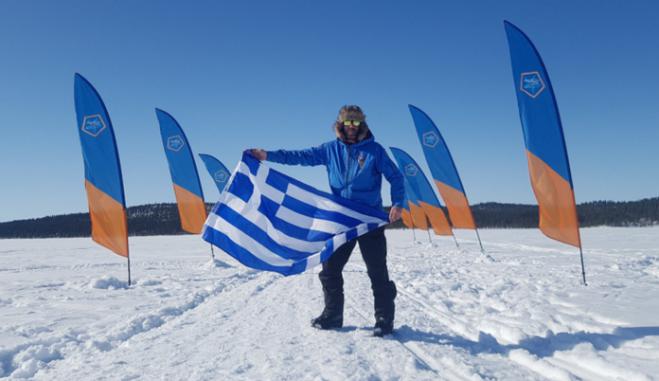 "I'm a person like everyone else. I haven't done anything to stand out, but with the love of the people, I turn to the Greeks, asking them to vote for me in the world competition to represent Greece and fulfill my dream: to cross the North Pole, "says the 36-year-old from Thessaloniki Christos Vasileiadis, speaking on 104.9 FM".

If he succeeds in joining a team of 20 people from all over the world, he wants to dedicate it to his ancestors, the Pontian refugees from Kars.

He has gathered 67,875 votes, but the announcement of the winners for the cdompetition is not expected before 7 January.

“To my refugee grandparents, to their creativity, optimism, and love of life. This year marks 100 years since the beginning of the persecutions, the genocide of the Pontic Greeks and the Greeks Asia Minor, "he says emotionally.

Voting on the Internet closed on 12 December. Christos is optimistic. “I hope to succeed, like my brother Vangelis, who made the same journey in 2018 with the help of Greeks from around the world. He was the first Greek to conquer the North Pole! I hope to be the second to go to the North Pole and say, "The Vasileiadis brothers did it".

Christos is a DJ, playing contemporary music, but in the video of the online competition for his nomination to join the North Pole team, he chose the sounds of his beloved Pontic Lyre.

He is a fan of sports, football and tennis. He loves stray dogs. "They're like us humans," he says, and hosts several strays until he finds the people who will take care of them. “I found the last abandoned dog in Potidea, Halkidiki. I brought it to Kalamaria, and until someone adopted it, I ... loved it! That's why our farewell was so difficult. But it wouldn't have happened otherwise, not many dogs fit into my small apartment. "

Christos Vasileiadis is the only Greek to participate - for the second time - in this year's international competition. Last spring he made the same effort to take part in the multinational mission. He did very well, but on the last day of the competition, although he was the first to close the deadline, the Portuguese candidate surpassed him. "He was helped by the Portuguese state television Facebook page, with millions of followers, as well as my brother Vangelis, who was helped by the Athenian-Macedonian News Agency and many other Greek media outlets." "Personally, I am grateful to all the Greek media outlets who are trying to help me these days."

"They ask me how much money I will get. There is no prize, nor am I paid for something. They told me about temperatures of -40 °, the unique northern lights, the sledding trip of six husky dogs, and there will be 200 dogs on the mission. This story and the relationship with dogs in the frozen Arctic, which you have to cook for you and the dogs, touches me a lot."