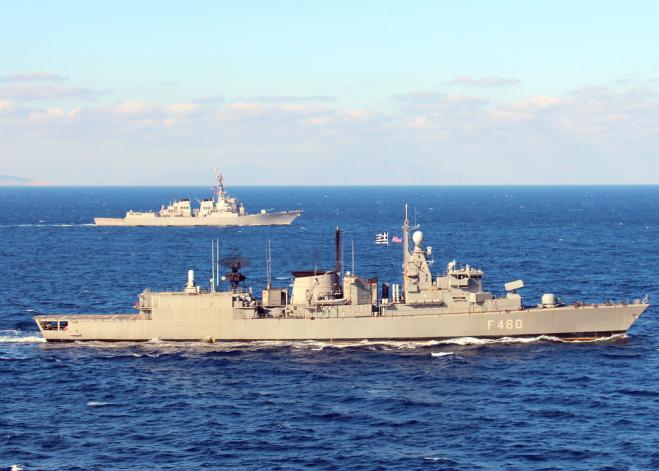 Greek armed forces have been placed on full alert after the navtex issued by Turkey encompassing a sea area 200 miles east of Crete and 180 miles south of Kastellorizofor seismic research by the Oruc Reis research vessel, until 2 August.

In essence, Greece is in the process of preparing for war, with a massive revocation of leaves issued for armed forces personnel. The hasty return of the head of General Staff, Konstantinos Floros, from Cyprus is also indicative.

The military units in both Evros and the remote Aegean islands have also been mobilized. But 85% of the fleet has taken up planned battle positions in the Aegean and in the Eastern Mediterranean. The aim is to send the message to Ankara that the Greek government is not bluffing when it states that if necessary it will use the armed forces to obstruct Turkish research within the Greek EEZ.

But Ankara is also flexing its muscles. The "Oruc Reis" is essentially covered by a fleet of 17 Turkish warships, which were anchored mainly at the naval bases of Antalya and Aksaz. Ankara also demonstrated its strength in the air yesterday. Six formations consisting of F-16 and F-4 fighters, as well as three CN-235 spy planes and a helicopter, committed 82 violations of national airspace and 17 violations of air traffic rules.

Greek fighters rushed to stop them resulting in virtual air battles. Finally, a pair of Turkish F-16s flew over Kastellorizo ​​at 29,000 feet at noon. In this case, too, the Turkish aircraft were identified and intercepted by respective Greek fighters.

Referring to the new Turkish Navtex, Tayyip Erdogan said: "We do not need anyone's permission, neither for our seismic vessels, nor for drilling rigs. We have rights in the eastern Mediterranean and we have taken action," he said, adding: "We will continue to make decisions based on our national sovereign rights. We will continue to act as a single country, which does not ignore the rights of others, but takes into account its own. "

The Turkish media have not so much highlighted the ongoing Greek-Turkish crisis as a possible cause of war. They report the issue as secondary news and stand more "on the punitive attitude of Greece, which insists on painful European sanctions." Turkish social media, however, is on fire. That is where the threats and the nationalist slurs dominate. They emphasize the supremacy of Turkey and the terror that has flooded, as they characteristically claim, the Greek government and the people.

The Greek Prime Minister yesterday contacted the Minister of Defense Nikos Panayotopoulos and the head of GEETHA Konstantinos Floros. "Together with the [Cyprus] National Guard, the General Staff of National Defense, that is, the Armed Forces of Greece, are capable of carrying out what the Greeks have in the back of their minds, without needing to say it," said General Floros from Cyprus. just before leaving in a hurry.

Yesterday, Kyriakos Mitsotakis met with German Foreign Minister Haiko Maas, who is visiting Athens and had talks with his Greek counterpart Nikos Dendias. The Prime Minister stressed that the imposition of sanctions by the European Union against Turkey will now be a one-way street. Turkey must stop drilling in the Eastern Mediterranean if it wants to make progress in EU-Turkey relations, the German Foreign Minister said during a meeting with his Greek counterpart yesterday at noon.