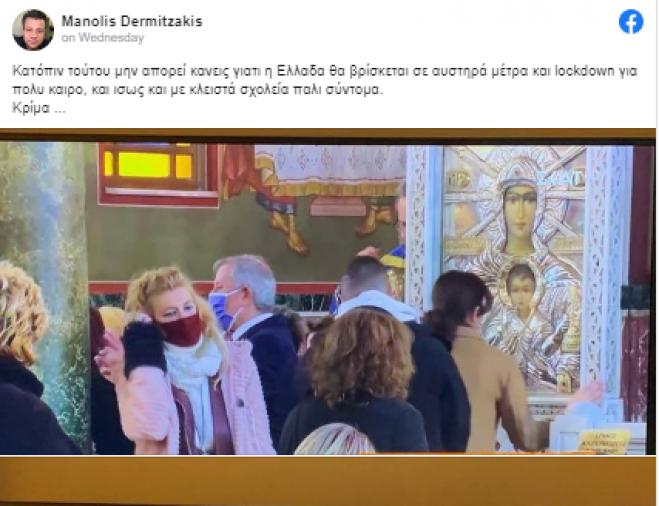 The topic of yesterday's insubordination to covid measures for the celebration of the epiphany was a topic commented upon even by Reuters.

Groups of believers in various parts of Greece, sometimes even at the suggestion of clergy, ignored the measures for the coronavirus and decided to honor the Epiphany, resulting in an alarm to health authorities of the country, since in several cases there was intense crowding.

Such incidents took place in churches of Thessaloniki, Chania, but also in Brahami in Athens where believers formed huge queues in order to enter the holy temples. In fact, Athanasios Exadaktylos, member of the committee of experts and president of the Panhellenic Medical Association, speaking to SKAI, described these images from the churches as very worrying and stressed: "We are not at a point where we are allowed to feel that the danger is gone. We are in a very dangerous place. We have to be very careful to return to a partial normalcy." He also pointed out that non-compliance with the measures has consequences.

Besides, the professor of Genetics at the Medical School of the University of Geneva Manolis Dermitzakis, in a post, attached photos from the Temple of the Diocese of Piraeus, where believers rushed to commune and commented: "After this, no one wonders why Greece will be in strict measures and lockdown for a long time, and maybe with closed schools again soon. Pity…".

According to tempo24, the metropolitan, accompanied by the former Kalavrita metropolitan Ambrosios, threw the cross into the sea in the old port of Aegio, while two believers fell in the water to retrieve it, as usual, ignoring the measures in force due to the pandemic of the coronavirus.

Naturally, the Coast Guard intervened, while fines of 300 euros were imposed on the faithful, based on the relevant protection provisions against Covid-19.

As the Diocese clarified in the local media: "There was no spontaneous liturgy what is being heard is non-existent. The metropolitan is at his residence". As for the imposed fine of 1,500 euros, the Diocese responds that "it has not yet become known to the metropolitan whether a fine was imposed or not" after the intervention of the prosecutor.

Thessaloniki: Citizens threw the cross into the sea
However, tension prevailed on Wednesday morning on the quay of Nea Paralia in front of the White Tower in Thessaloniki, when a group of people proceeded to an improvised ceremony of throwing the Cross into the sea for the Epiphany. The police tried to stop them, chasing them, in fact, for several meters. According to information, police proceeded to at least five arrests.

Earlier, people using a microphone installation protested against the police measures and the quarantine, saying that they had addressed 50 priests to come to perform the ceremony, but all had refused.