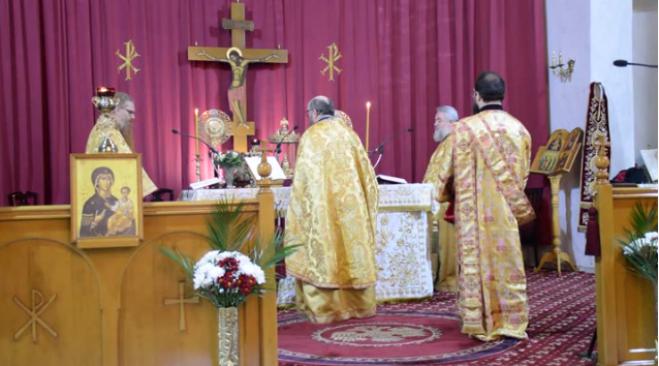 An alarm has been sounded in Thessaloniki and especially in the municipality of Neapolis-Sykeon in the last 24 hours, after the detection of a case of the South African mutation of the coronavirus, the first in Greece.

He is a deacon of the Diocese of Naples and Stavroupolis, who is an associate of Metropolitan Varnavas and lives in Polichni. According to information from Voria.gr, the 36-year-old, father of two children, had also contracted coronavirus in the autumn of last year. In particular, he was found positive for the virus in October, with very mild symptoms, simple nausea, which he quickly overcame.

According to the same information, the deacon was present at the meals that took place in the Holy Temple of All Saints in Xirokrini. Therefore, the possibility that the mutated strain has infected one of them is being considered, as, among other things, immigrants from Africa are fed there. Of course, safe conclusions about the origin of the executive and the possibility of his dispersal in Thessaloniki are expected to emerge from the tracking carried out by EODY in the last hours.

The 36-year-old deacon has been in quarantine for two weeks, while the health of his family is in good condition.

What happens to the second possible case
As for the possible second case of the mutated strain, this concerns another deacon, also 36 years old, who was operating in a sacred temple in Kordelio. According to information from Voria.gr, he was found positive for the coronavirus on January 7, after mild symptoms, and was immediately quarantined. Just last Wednesday, in a new test that was done to him, he tested negative for the virus.

However, laboratory tests are expected to determine if he, too, is infected with the mutated strain, which takes days to be detected and is transmitted at a very fast rate.

The 36-year-old deacon was re-submitted yesterday to a new test by EODY and is waiting for the results to come out of quarantine.

It should be noted that since the morning EODY has been conducting rapid tests for the coronavirus at both the town hall of Naples and the town hall of Sykea, under the fear of the spread of the South African mutation in the community.