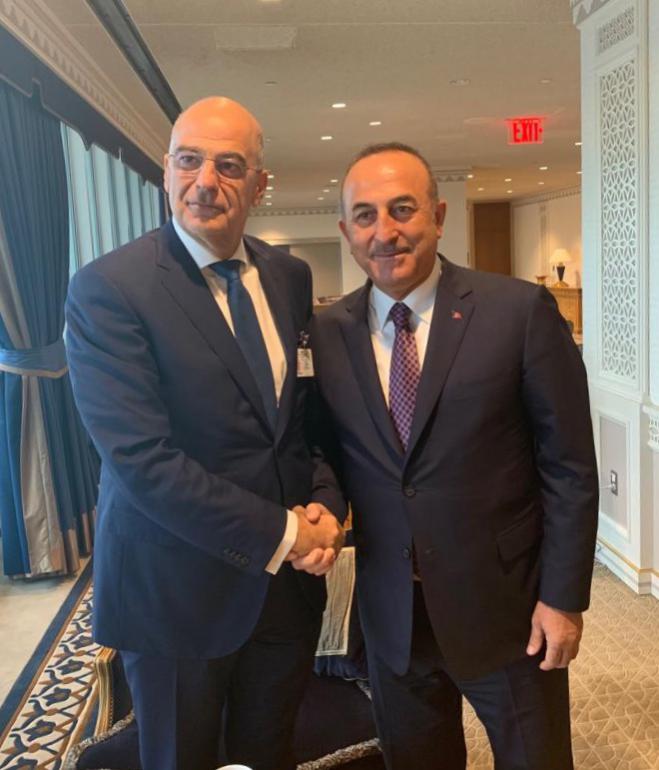 Contradictory, but largely expected, messages were sent by Mevlüt Çavuşoglu on the first day of his visit to Greece.

The Turkish Foreign Minister initially travelled to Komotini, for a private visit where he made sure to provoke Greece with his references to a "Turkish minority" and "Turkish schools", while a few hours later he arrived in Athens where he was welcomed by the Greek Foreign Minister Nikos Dendias, with whom dined at the restaurant "Dionysos" in the shadow of the Acropolis.

The informal dinner lasted about an hour and a half and was also attended by the Undersecretaries of Foreign Affairs of the two countries Costas Frangogiannis and Sedat Onal, the Secretary General of the Ministry of Foreign Affairs Themistoklis Demiris and the Ambassador of Turkey to Greece Burak Ozugergin, in view of their meeting tomorrow at the Foreign Ministry.

Expected proclivities and the answer of Athens

Although Mevlüt Çavuşoglu's private visit to Komotini was considered milder than other visits by Turkish government officials in the past, the Turkish Foreign Minister reiterated Ankara's constant proclivities as concerns Thrace by referring to a "Turkish minority" and "Turkish schools ", a fact that provoked the immediate response of the Greek Ministry of Foreign Affairs, with an official statement by spokesman Alexandros Papaioannou.

This scenario was rounded out by the Turkish barbs against Greece from the representative of the Turkish Minister of Defense, who denounced Greece for violating the moratorium on military exercises in the Aegean on May 19, a day of remembrance for Kemal Ataturk. While Mr. Çavuşoglu was in Thrace, Turkey proceeded with 51 violations of Greek airspace in the Aegean.

Çavuşoglu kicked in with a provocation regarding the status of the Muslim minority in Thrace. The Turkish Foreign Minister went directly to the Turkish consulate in Komotini, from where he tweeted his first public statement.

"We are in Greece to meet our compatriots in Western Thrace and discuss bilateral relations. In Greece we will meet members of the Turkish Minority of Western Thrace", he wrote.

Çavuşoglu's visits to the Turkish consulate and the Minority High School

"In Western Thrace I met with the Mufti of Komotini Ibrahim Sherif and the Mufti of Xanthi Ahmet Mete. The work of the Muftis contributes extremely to the preservation and strengthening of the unity and solidarity of the Turkish Minority ".

According to the website xronos.gr of Komotini, as soon as the news became known that the Turkish Foreign Minister was visiting the area and devising a way to be go "privately" to Pachni, there were resounding reactions from Pomaks, with the most characteristic being that of the Panhellenic Association of Pomaks, which characterized Mevlüt Çavuşoglu as persona non grata and undesirable, emphasizing that the Pomaks belong to the Muslim minority.

On the sidelines of the NATO Summit

In the shadow of all these rhetorical and verbose skirmishes between Athens and Ankara, Mevlüt Çavuşoglu stated that he was coming to Greece with a "positive agenda". An attempt to smooth over this contradictory climate was the warm embrace of the two Foreign Ministers a few hours before tomorrow's official talks of the Turkish Foreign Minister with his Greek counterpart and Kyriakos Mitsotakis.

Despite this climate where disagreements and divergences are publicly and clearly recorded, Mevlüt Çavuşoglu comes to look into the possibility of a Mitsotakis-Erdogan summit with Ankara eagerly wishing for a meeting in Brussels at the 14th NATO Summit.

According to information, in the meeting that will take place today at 10:30 at Maximos Mansion with the Greek Prime Minister Kyriakos Mitsotakis, M. Çavuşoglu is expected to convey the message of the Turkish President, that first of all the relations between the two countries must be normalized. and normalization means that regular meetings will take place, to advance the issues that have been discussed in previous meetings.

Mevlüt Çavuşoglu in his exclusive interview with Vima tis Kyriakis, in fact, implies that Turkey does not rule out The Hague, but sets a condition for a bilateral dialogue on the whole agenda of Turkey and not exclusively for the delimitation of the continental shelf. Greece insists.

In fact, Mr. Çavuşoglu indirectly but clearly calls on Greece to relinquish its unilateral right to extend territorial waters in the Aegean to 12 miles, while characterizing the Greek position on Kastelorizo ​​as absurd and not failing to say that Turkey is capable of responding outside the diplomatic field if it deems that its interests are not safeguarded through the diplomatic channel.

"To ensure our rights, our preference is diplomacy and dialogue, but we are able to go in any direction that our neighboring Greece or other countries choose," said Mr. Çavuşoglu meaningfully in Vima.

In this context, Mevlüt Çavuşoglu, with his presence in Komotini and the contexts of his visit, essentially showed once again Turkey's intention to expand the agenda of the talks with the issue of the minority in Thrace.