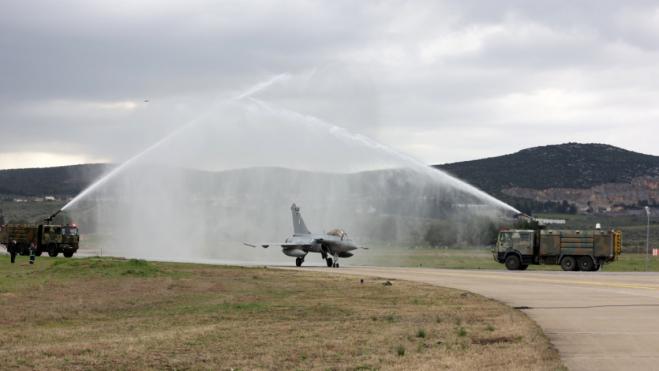 With an honorary passage over the Acropolis, the first six Rafale fighters marked their induction into the 332nd “Hawk” Squadron of the Hellenic Air Force shortly before landed at Tanagra.

The six fighters took off from Istria, France, near Marseilles, and flew directly to Greece.

The landing at Tanagra airport started after 12.45, in the presence of the Prime Minister, Kyriakos Mitsotakis.

The headquarters of the 332 squadron home of the new Hellenic Air Force’s newest assets, became the transponder of the harbinger sent by the first Greek Rafale pilots with the blue insignia on their wings.

“Greece, we will be worthy of your expectations.  332 Squadron flies into the future,” said the pilot of one of the Rafale at the National Aviation Operations Center.

In total Greece is acquiring 24 Rafale F3R. After the first six the schedule provides: