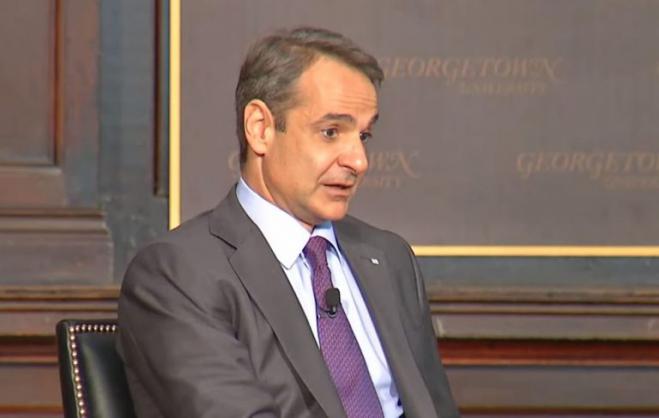 The last thing NATO needs is another source of tension between Greece and Turkey, Greek Prime Minister Kyriakos Mitsotakis told veteran Washington Post editor and columnist David Ignatius on Monday, during a live-streamed Q&A session at Georgetown University on Monday.

Mitsotakis, speaking hours before his meeting with US President Joe Biden at the White House, underlined that he’s told Turkish President Recep Tayyip Erdogan that “this is not a time for aggressive moves; it’s not a time to promote revisionist views of history, let us find a framework for talks to deal with our issues. ”

He also said it was unacceptable that a NATO member-state violates another’s airspace, a direct rebuke of Turkey. However, he said he was keeping communication channels open, in order to sustain a positive agenda.

Pressed further, he said Ankara’s threats to veto Finland’s and Sweden’s NATO membership will be resolved sooner, rather than later.

Commenting on the Russian invasion of Ukraine, Mitsotakis said he was “proud as a European leader for Europe’s response” to Russia’s invasion and the following sanctions, but foresaw the war lasting a long time. Despite this, he said, channels should remain open with Russia, as European leaders seek a resolution through negotiations.

He added that Greece retains strong cultural and religious ties with Russia, and does not view Russian people with hostility. "However, Greece has fought for its own independence, and had the obligation to stand by Ukraine and support it when its national sovereignty was threatened," he stressed.