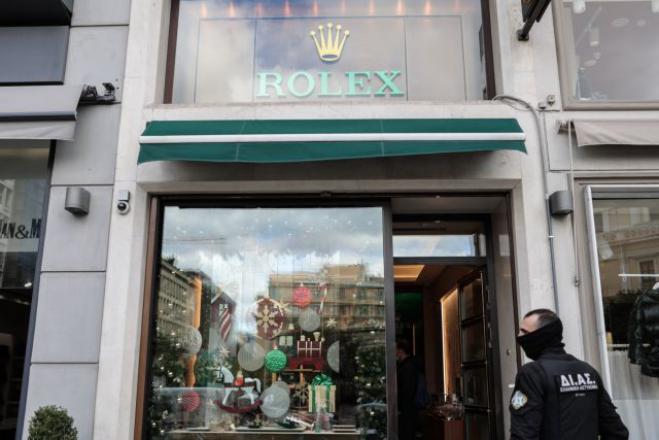 The armed robbery at a Rolex store that took place on Tuesday morning in the center of Athens has caused a great stir, with the police forces launching a manhunt to locate the perpetrators, but no arrests have been made so far.

Speaking to MEGA channel, jeweler and designer watch dealer Manos Kartsonakis gave details about the high-value watches stolen in the robbery, who referred to the unique serial number each watch has.

As he said "these watches are certainly of great value, over 5,000 euros each, much more if they are made of gold or contain diamonds".

Explaining exactly what the serial number means, he said that "every time a customer goes to a watch store to sell something, the dealer contacts the official dealer who has a database of all the watch serial numbers, what model it is, what chronology. He knows if he has an issue, a problem. So, in case it was stolen, its owner is arrested."

Among other things, he called it "sad and unpleasant that such an event takes place in the center of Athens", noting that "it makes us all feel insecure".

Attica Police officers investigating the case have been looking for footage from store cameras for the past two weeks. According to their assessment, the robbers had well planned the hit on the luxury watch store, as it is a "high risk" move due to the nature of the store and where it is located.

The store is located in Kolokotroni square, in the center of Athens, while at a distance of a few hundred meters there are constant patrols of the Hellenic Police almost on a daily basis.

There were four robbers and they arrived at the scene with motorbikes which they parked outside the store.

With their features covered by full face masks, they waited for a customer to leave the store. Then, the three pushed open the door of the shop and entered it, without having to open the door for them from the inside.

One of the robbers was holding the gun with which they threatened the store guard and the clerk, while another was holding the sledgehammer they used to smash the watch cases.

One of the four attackers remained outside the store to watch for the escape vehicles and to check if police forces would appear.

According to MEGA channel's exclusive information, the perpetrators have been recorded by several security cameras, but they also made another fatal mistake. During their escape, the hammer they used to remove the luxury watches from the shop windows fell behind them.