The 2018 Master of Ceremonies was the executive producer of Yahoo Entertainment and Lifestyle, Leslie Peirez, who amongst others said that the event was: "all about a celebration of life, love and victory – and most importantly, about raising awareness for breast cancer, while honoring a remarkable woman", meaning Katerina Dina Raptis.

The founder and chairperson of Kat's Ribbon of Hope, Despina Yiaran, spoke about the foundation's partnerships with some of the finest top institutions in the world, and referred to the work of Dr. Neil Iyengar from Memorial Sloan Kettering Cancer Center, Dr. Annette Lee from Feinstein Institute for Medical Research, and Dr. Eleni Andreopoulou from Weill Cornell Medicine Breast Center. The Adelphi NY Statewide Breast Cancer was represented at the event by executive director, Hillary Rutter, and its social workers, Angela Papalia and Lois Goetz.

The foundation's Gala also offers an array of fun events to attend throughout the day, including a Golf outing. The Gala also always offers grand valuable selections for the Silent Auction for guests to take advantage of.

Keynote speaker was the best-selling author and speaker, Agapi Stassinopoulos, who said that she would be the "heart-note" speaker instead, as she would speak about the power of love, highlighting the love between the two sisters, Despina Yarian and Katerina Dinas Raptis, as well as to her sister, Arianna Huffington.

Agapi mentioned that her mother, Elli, raised her in Greece with an "unshakable trust of life". She added that her mother made her realize that "adversities, where given to us, but not for us to go down, for us to overcome" and always said: "Life is for you."

Thus, Agapi stressed that often the first thing people who are diagnosed with breast cancer feel, is that life is punishing them, whereas, she highlighted, there is nothing wrong with them: "Your goodness is there, your love is there, your heart is there; do not ever shut off your heart to yourself. This is the most important thing because when the hearts are open, then we are able to bring the healing in ourselves, and to each other".

After the speeches the evening topped off with a Live auction, and guests enjoyed the Casino Games and danced all night to the beats of the DJ.

This year, Kat's Ribbon of Hope's gift to all guests was of Agapi Stassinopoulos's new book "Wake Up to the Joy of You".

The founder and president of Kat's Ribbon of Hope, Katerina Dina Raptis, was emotionally moved during her speech, while mentioning the breast cancer survivor rates: "Right now in the United States there are 3,500 million women who are breast cancer survivors and I stand here proudly to say that I am one of them".

About Kat's Ribbon of Hope

An important part of the Foundation's mission is to provide financial assistance to women who would otherwise be unable to afford early detention and treatment services for breast cancer and save lives by making information and services more accessible to women.

The Foundation was established by Katerina Dinas Raptis in 2013, who is currently the President of the Board of Directors and a breast cancer survivor herself. The foundation is also run by George Raptis and her sister Despina Yarian, who both are founders and chairpersons.

As Katerina Dinas Raptis told NGTV in the past, she never wondered "why" this disease happened to her, but in contrary she considered that through this process, she appreciated more the worth of life and that her mission was to support other women who experience that disease. 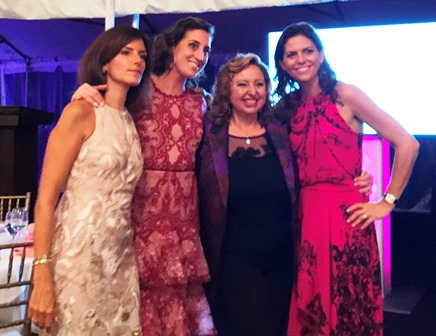