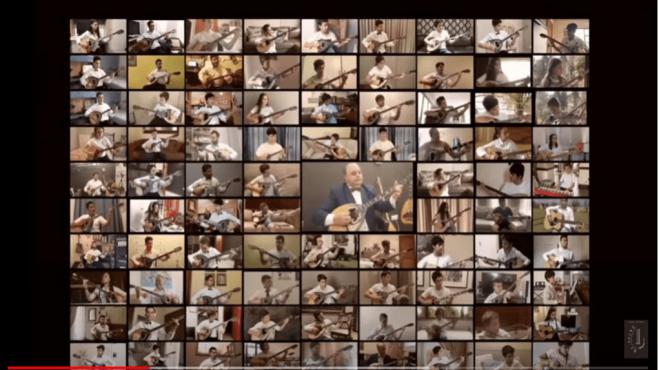 One hundred and twenty students of the Saheti School, of the Greek afternoon community schools which operate under the auspices of the Hellenic Federation of South Africa but also of students of the music school in Greece "En chordo", stayed home due to restrictive measures for the dispersal of the coronavirus created an impressive video. All together, each from his own home, played one of the most famous zeibekika, called "Evdokia"!

According to journalist Katia Tsimplaki, on the website of the Greek Community of Cairo www.ekkairo.org, the creation of the video was funded by the Hellenic Federation of South Africa, while the more than 120 talented children who play are a group from Greece and South Africa who are being taught Greek music.

The children from South Africa are students of the Saheti School where the bouzouki and other traditional instruments are taught by the seconded teacher, Mr. Babis Pappas, with Mr. Georgopoulos as artistic director, as well as students from other Greek community schools. This video is a product of the collaboration of the Hellenic Federation of South Africa with the music school "En chordo" with conductor Mr. Theodoros Georgopoulos who implemented the original idea of ​​Mrs. Gioula Pantazi, who coordinated the whole effort.

The Coordinator of Education of South Africa, Mr. George Vlachos, expressed his pride for the Greek children: "We all feel proud and we get even more strength to continue our work, which is the teaching and dissemination of the Greek language and culture!" Congratulations to the President of the Hellenic Federation, Mr. Ioannis Filippou, to all its members and to all those who supported his initiative to create this wonderful in execution and number of video participants with music that touches the souls of all people of Greek and non-Greek origin ”.

"Each of us who listen to and watch this video feels like they are part of this love song. Congratulations also go to Maestro and Artistic Director, Mr. Theodoros Georgopoulos and to our teacher Mr. Babis Pappas, Ms. Giola Pantazi, to all those who worked and collaborated to get this result, to the children and the musicians who took part in the song. and especially to all the Greek children of South Africa ", concluded Mr. Vlachos.