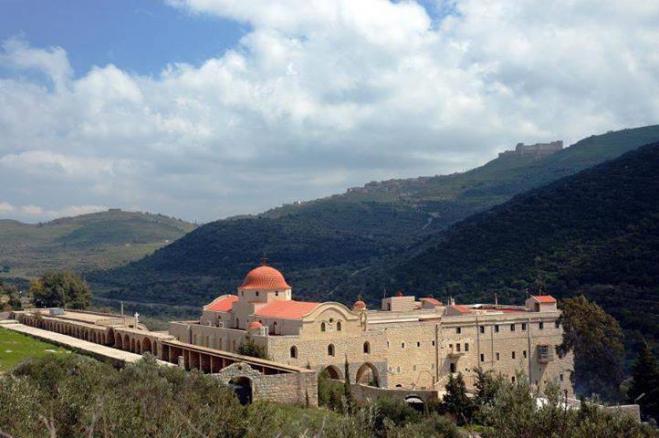 The following photo was sent to the Greek Genocide Center by a Greek living in Syria and shows the Greek church he attends, Deir Mar Georges (Saint George Monastery).

It is one of many Greek churches in the Homs region of Syria called Wadi al-Nasara (Ar: وادي النصارى‎, Gr: Κοιλάδα των Χριστιανών) which means "Valley of the Christians." The region has 40 villages inhabited almost entirely by Greeks belonging to the Greek Orthodox Church of Antioch.

He tells the Center that the Greeks there identify as "Rum" or "Romyi/Romey" which was the term used to describe Eastern Orthodox (Byzantine) Greeks.

He says there are some 50,000 Greeks living there and they've been there since Alexander the Great. While they are all Arabic-speaking, some still speak Greek.

He also sent the following video of a song written by Patriarch John X, primate of the Greek Orthodox Patriarchate of Antioch sung partly in Greek.