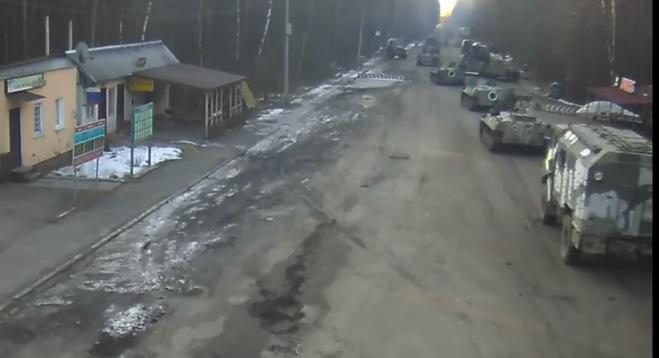 It was just before 05:00 (Greek time) on Thursday, when Russian President Vladimir Putin - confirming the information leaked earlier by US intelligence - announced that he had ordered a Russian invasion of Ukraine.

"I have decided to launch a military operation," he said in an emergency televised address, with the first explosions in Donetsk, Kiev, Kharkiv, Mariupol and other cities coming minutes later.

"Our country is being bombarded from all sides," describes to in.gr Eleni Dombra, vice president of the Hellenic Associations of Mariupol, in which the Greek element is strong.

The residents woke up scared to the sound of explosions, however they try to keep their composure. In fact, at the moment, there are many who refuse to leave Mariupol, although one can not know what is to happen.

"We are fine, but not safe," said Dobra. "God help us, we try to keep our composure."

It is noted that the separatists control - at least until today - areas around the cities of Donetsk and Lugansk respectively and up to the Russian border to the east. The rest of Donbass, almost 50% of its territory, is still under the control of the Ukrainian army.

These areas controlled by the Kiev government include Mariupol, home to a large Greek community of about 120,000 people. The city of Mariupol itself was founded by Crimean Greeks in the late 18th century along with 23 pure Greek villages.

The recommendation that remains to the Greek citizens is not to travel to Ukraine at the moment and those who wish assistance for their departure to contact the Greek consular authorities in Ukraine.

According to information, a plan has been drawn up for their departure, if required. The goal in the first phase will be their safe departure from Ukraine.

However, according to the latest data, the number of people who want to leave the country is quite small (around 2,000 by Wednesday morning), data that may change in the next few hours due to rapid developments.

It is noted that Athens has recently strengthened, especially in the light of new developments, the Greek consulate in Mariupol with two diplomats to provide assistance to Greek citizens and expatriates in the area. In fact, Greece is the only country that currently operates a consular post in Mariupol.

Embassy of Greece in Kiev:

Email / Website: This email address is being protected from spambots. You need JavaScript enabled to view it., http://www.mfa.gr/kiev

Email: This email address is being protected from spambots. You need JavaScript enabled to view it.

Email / Website: This email address is being protected from spambots. You need JavaScript enabled to view it., http://www.mfa.gr/odessa