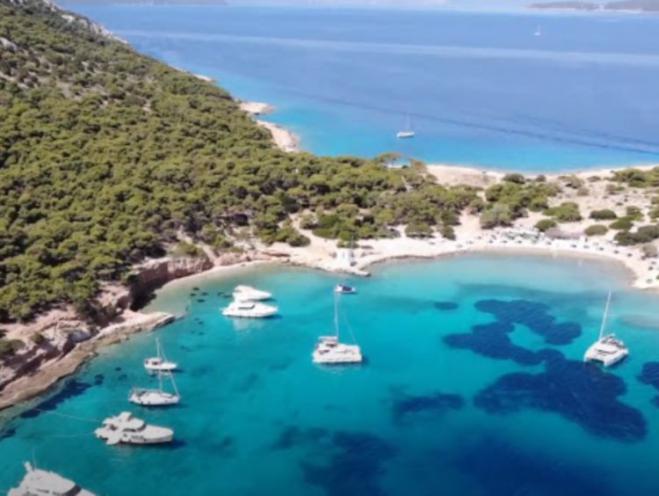 A short distance from the cape of Perdika in Aegina, there is a green beautiful island named Moni, being owned by the Holy Monastery of Chrysoleontissa of Aegina. Its peculiarity is that its inhabitants are none other than some wild animals.

For thirty whole years, from 1960 to 1990, Moni belonged to the Hellenic Tourist Club, to the members of which it owes the significant number of wild animals that now constitute the ecosystem of the island, while since 1962 it has been declared a Natural Breeding Park. There,deer of the Rhodian species, squirrels and many peacocks which are quite familiar with humans live freely in the forest. Also on the rocky parts of the island wild goats o the kri-kri species climb undisturbed, which often quench their thirst with sea water. In the past, there were other species such as hares and ponies, but unfortunately they did not survive.

During those three decades, there was an organized campsite on the island, remnants of which you may encounter during your tour there. As for hiking enthusiasts, at the highest point of the island, through a route from the shore where you will walk among wild olive trees, spruce and cedars, you will find the observatory, a remnant of the German occupation, with incredible views of the Saronic Gulf and the surrounding area. Although the roof of the observatory may have fallen over the years, however the coverage offered by the rocky higher passages is assured. These were the reasons why this point was chosen to build the observatory.

And while the southeastern side of the island is barren and full of steep cliffs, its northwestern side is full of vegetation, which even reaches so low that it reaches the shoreline. At this point, mainly during the summer months, there is an organized sandy beach with sunbeds and a beach bar for drinks, music and hearty appetizers for all tastes.

Moni has two beautiful blue beaches, in the cool waters of which, in addition to a refreshing dip, you can even fish, enjoying unique quiet moments with white seagulls and small crabs that roam on the rocks. In their waters you will also find several boats moored there mainly during the summer months for endless dives, looking for the tranquility of nature that is generously offered to them on the island.

As for your transportation there, in case you do not belong to this group of priviliged yacht owners, it is done only by boats, both from the port of Aegina and from Perdika, which, at a very low cost, depart at regular intervals from 10 in the morning until 6 in the afternoon.

But as long as the island is a protected ecosystem, the night there is only for its "permanent" inhabitants, leaving man the joy of calm and exploration only when the sun is high in the sky.