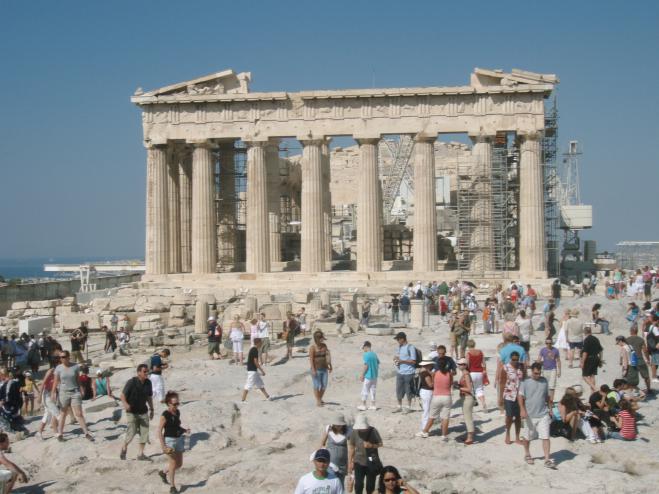 The "reputation" of Greece in July based on the experience of the destination (accommodation, dining, attractions, etc.) among visitors is showing a slight decrease from 9.0 to 8.9, something that happens internationally - often and to a greater extent - during the peak of the season, as reported by the Institute of Greek Tourism Enterprises federation (SETE)-INSETE.

On the contrary, Athens maintains its score of 9.0 for four consecutive months. Both Athens and Greece are rated well above the European average (8.5) and among the top five best rated destinations in Europe.

The country's reputation has been positively enhanced by a range of issues including culture, food, accommodation, events and a wealth of destinations that cater to a wide range of tourist preferences.

INSETE, in the context of monitoring tourist activity through diversified sources, collects big data for Greece, Athens and competing destinations (Italy, Spain, Portugal). These data capture: a) the evolution of the image of each destination and b) the tourist experience in terms of the various individual 'components' (e.g. accommodation, food, attractions, etc.), allowing comparisons between of Athens and Greece and on the other side τhe competing countries. The collection and processing of data on behalf of INSETE is done by the company TCI Research.

The findings of the analysis

According to the analysis for July 2022, the main points are as follows:

- The volume of online media conversations-threads about Greece and Athens increased significantly in July, as visits also increased.

-The conversations related to the pandemic had a similar trend to that of June, i.e. they remained stable for Greece and the corresponding ones for Athens showed a slight increase.

-Most of the Covid-focused conversations were mostly about the "tourism boom compared to the pre-Covid period" and indirect correlations such as the Euro/Dollar exchange rate encouraging US travelers to visit Europe and Greece after the Covid.

-Greece's online reputation followed the same downward trend as Spain and Portugal, mirroring the overall decline recorded worldwide and across Europe by UNWTO and ETC.

-Athens' online reputation dropped to 8 points (Net Score), meaning an almost equal share of positive and negative reports for the capital during the month.

-At the same time, many positive reputation factors for Greece remained active in July, with celebrities and tourists "flooding" the country. The destination's reputation was positively enhanced by a number of issues including culture, food, accommodation and events. The new mobile application called "Culture is Athens" provided by the Municipality of Athens, as well as the Athens International Airport (IAA) named the best in Europe according to Google user ratings, were the two highlights concerning tourism in Greece. In terms of gastronomy, July's comments focused on modern Greek recipes, especially those with iconic products of Greek cuisine.

A variety of destinations

Throughout the month, a large number of Greece's destinations were featured, demonstrating the country's ability to satisfy a wide range of tourist preferences (eg Elafonisos, which is among the 50 best beaches in the world, lesser-known destinations in August such as Lipsi, Skyros).

There were also discussions about Santorini, highlighting it as a luxury destination, while at the same time it is one of the most important places for the study of geological phenomena and formations.

Other positive reputation factors include comments about a luxury hotel in Athens and its spacious facilities and the Greek tourism minister's proposal regarding German pensioners staying in Greece due to inflation and the energy crisis.

Perceptions of health safety among visitors decreased in Greece (-0.77) but recovered in Athens (+0.25), with both indicators remaining in a positive range compared to the vigilance level