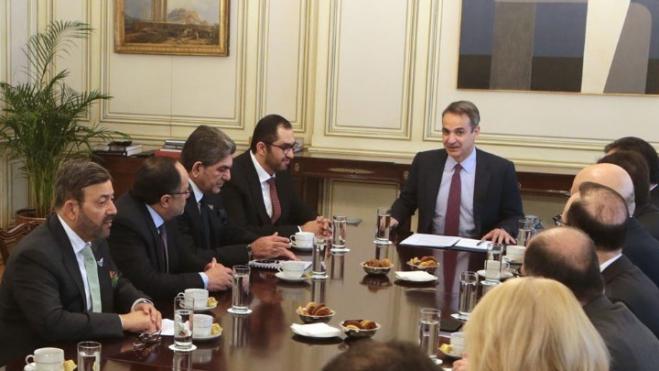 The prime minister welcomed the launch of the Enlarged Strategic Cooperation Forum, stressing that it is an excellent basis for mutually beneficial economic cooperation between the two countries, with emphasis on attracting investment and further enhancing bilateral cooperation in all areas.

"It is my pleasure to welcome your delegation to Greece. I would like to congratulate all those involved in ensuring that this trip is made so soon after our very successful visit to Abu Dhabi," Mitsotakis said. The prime minister underlined that he has very ambitious plans for a broad and in-depth strategic partnership.

"I think this is the first opportunity for your delegation to become familiar with developments in Greece. As you know, we are a relatively new government - we have been a government for seven months - but I think the overall economic climate has already changed significantly," the prime minister said, noting that Greece is open to investment.

"Interest in the country has already increased. Capital markets reward Greece by offering historically low borrowing rates. The rating agencies are upgrading the country, there is a general sense of optimism and we want to make sure that the UAE is part of this success story," Mitsotakis underlined. "I think that you will leave Greece with a much better understanding of what is happening in the country," the prime minister added.
On his part, Sultan Ahmed Al Jaber stressed that the leadership of the United Arab Emirates is very interested in and sincerely committed to exploring different areas of cooperation, promoting existing ones and moving towards a multi-faceted and in-depth strategic partnership with a great country like Greece.

"I and the delegation representing the various entities, the government and the private sector in the UAE - we are very excited about the possibilities of cooperation between our countries," he said.
According to government sources, issues of mutual interest were extensively discussed during the meeting of government delegations of both countries, in the context of the expanded Greece-UAE strategic partnership, the strengthening of the two countries' economic ties, as well as regional developments.