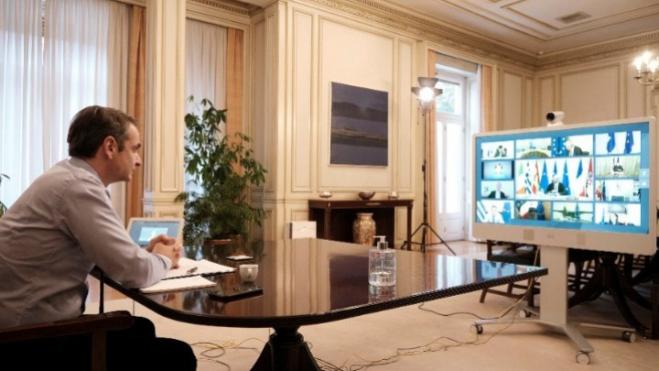 The video conference of EU heads of state and government on the coronavirus concluded late on Thursday, with the participation of Greek Prime Minister Kyriakos Mitsotakis.

According to sources, Mitsotakis insisted on a proposal of nine EU leaders to issue a corona bond in order to cushion economies from the shock of the coronavirus crisis, stressing that the nine countries supporting the proposal represented 57 pct of the eurozone's GDP.

The prime minister stressed the need for Europe to take bold initiatives, noting that the United States had announced a two-trillion-dollar economic support package and three million jobs have already been lost.

The Greek prime minister also referred to Turkey's stance towards Greece, and briefed his counterparts on the ongoing provocations at the borders, noting that Greece would continue to protect its borders, which are also the external borders of the European Union. He added that the prerequisite for any further discussion with Turkey is an end to the provocations.