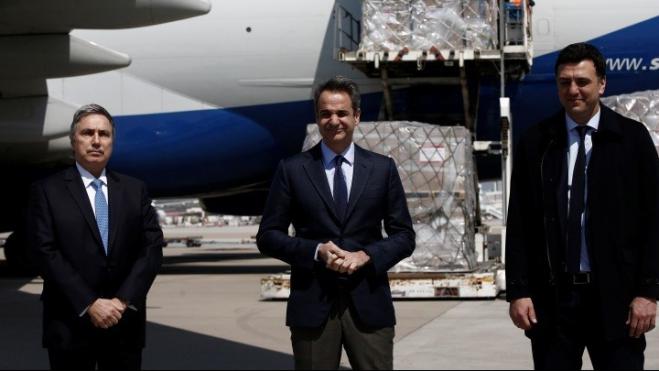 Some 8.34 million medical face masks were received on Tuesday at Athens International Airport (AIA), in the presence of Prime Minister Kyriakos Mitsotakis and Antonis Papadimitriou, president of the Onassis Foundation which completes a donation of 13.5 million masks to Greece’s healthcare system.

Mitsotakis thanked Papadimitriou “ on behalf of the National Health System and all the Greek people for this extremely generous offer,” and on the occasion also thanked “ all institutions - large and small - but also all individual citizens -who have contributed to this effort with a sense of responsibility.”

He said that the Onassis Foundation’s donation is “ generous and touching, but so is the personal initiative of a woman at Grevena, northern Greece, who sewed masks on her own to offer them to Grevena General hospital."

The Prime Minister stressed that “ the fact that we are now in a better position against the coronavirus than many other European countries is no reason to let our guard down. We have to insist on the policies we have implemented against this pandemic."

Papadimitriou noted that the foundation responded to the government’s initiative and call to secure this many masks for the country “ with a sense of responsibility,” thus delivering “ the Greek government, the people, the National Health System, 13.5 million masks at a total cost of 7.75 million euros.”