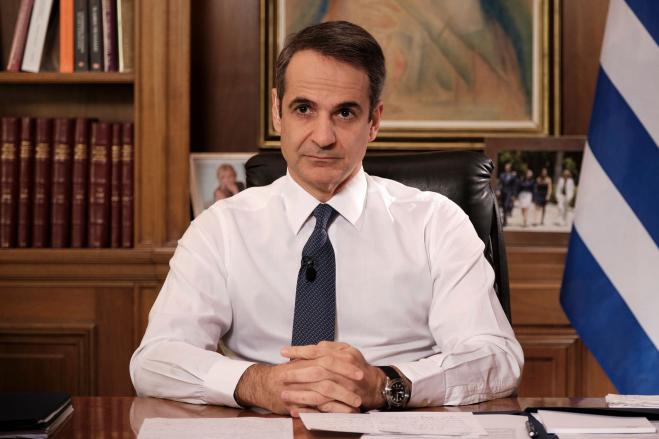 Prime Minister Kyriakos Mitsotakis addressed a message to the nation regarding the wiretapping case of PASOK opposition party leader Nikos Androulakis and emphasized that "today I am presenting 4 fields of changes that the government will propose".

In his address, the prime minister referred to the chronicle of the surveillance of Nikos Androulakis, underlining that it was in accordance with the letter of the law, however, it was politically incorrect and blamed the commander of the National Intelligence Agency-EYP, who resigned a few days ago, for underestimating the political dimension of the issue.

Kyriakos Mitsotakis emphasized that the objective political responsibility was assumed with the resignation of the general secretary of Grigoris Dimitriadis, while he emphasized that Mr. Mitsotakis himself had he known, would never have allowed the surveillance of Mr. Androulakis.

The prime minister essentially responded to the criticism that the EYP was under his supervision, stressing that there is a lack of additional political filters and in this direction he submitted four axes of changes to the National Intelligence Service, noting at the same time that a "slip" does not invalidate its national offer from external threats .

1st. Strengthening the accountability of EYP and the supervision of the parliament through the Institutions and Transparency Committee.

2nd Upgrading the role of the National Security Council for better utilization of information from EYP.

4th Changes within EYP to strengthen internal control, transparency, extroversion and training of its human resources".

No shadows are allowed in our Republic. That is why I want to talk to you openly about the recent developments.

A few days ago, I was informed that in September 2021, and while he was still an MEP, the National Intelligence Agency had made a legitimate connection to the mobile phone of Nikos Androulakis.

The process had the approval of a supreme prosecutor, exactly as stipulated by the provision passed in 2018 by the previous government. It lasted three months and was automatically interrupted, as provided by law, a few days after Mr. Androulakis was elected president of KINAL.

Although everything was done legally, the National Intelligence Service underestimated the political dimension of this action. It was formally adequate, but politically unacceptable. It should not have happened, causing cracks in public confidence in the National Security Services.

Because although it concerned a prominent political figure, its handling was incomplete. Precisely for this reason, the Commander of EYP was removed immediately. While the Secretary General of the Prime Minister's Office also assumed the objective political responsibility.

And since the word responsibility comes from the adjective meaning straight [in Greek], I repeat directly: what was done may have been in accordance with the letter of the law, but it was wrong. I was not aware of it and, obviously, I would never have allowed it!

The case highlighted, however, the lack of additional "filters" in the operation of the intelligence services. Because the monitoring of a political person certainly presupposes guarantees beyond the judgment of even an experienced and competent judicial officer.

On the other hand, though, I also want to be clear: the contribution of the National Intelligence Agency is important. It is emphatically reflected in Greece's readiness to face challenges such as those in the Evros or the Aegean. In our permanent diplomatic and defense armor. But also in society's daily battle with terrorism and crime.

A slippage, therefore, cannot overshadow a project of measurable national benefit. And one does not need to be an expert to realize how valuable reliable information is in the complex world in which we live.

This service is charged with national security and the protection of the homeland from geopolitical movements, but also from asymmetric and hybrid threats. That is why in most European Democracies similar structures are subordinate to the head of government or state, as the scope of their object exceeds the limits of a single Ministry.

But as valuable as the contribution of the National Intelligence Service was to strengthening the position of Greece, it becomes even more clear that not only the improvement of its operational efficiency is required, but also the overall re-evaluation of its control and supervisory framework.

The new Commander is one of the most experienced Greek diplomats and has all the guarantees to carry out this mission.

At the same time, the government immediately agreed to the establishment of a Commission of Inquiry, which will apparently operate under conditions imposed by the nature of the object to be investigated.

Because such a responsible process cannot, must not be turned into a spy soap opera for party consumption. Nor, even more, to become a cause of degradation of the national contribution of  EYP and undermining aspects of national security.

The truth must be shown in its true dimensions. Only in this way will we be able to deal with the perennial pathologies of the intelligence service.

I personally will be open to any creative ideas that incorporate best practices from abroad and strengthen the accountability mechanisms of such a critical agency for national security.

So I will gladly discuss proposals that will enhance transparency in the operation of our secret services without, obviously, hindering their mission.

Starting, of course, with the strictest safeguards in terms of legal attachments. This must be done and will be done immediately through a Legislative Act.

So, I am submitting today 4 areas of change that the government will propose:

1st. Strengthening the accountability of EYP and the supervision of the parliament through the Institutions and Transparency Committee.

2nd Upgrading the role of the National Security Council for better utilization of information from EYP.

4th Changes within EYP to strengthen internal control, transparency, extroversion and training of its human resources.

I will be honest with you. There are many enemies of the country lurking around who would like a weak National Intelligence Agency. And if some dark forces outside Greece strike any plan to destabilize the country, let them know that Greece is both strong and institutionally shielded.

We live in a dangerous world. But we are a Democratic state. And we have a sacred obligation to balance the security of the country and its citizens with the protection of the fundamental principles that protect the private sphere and the privacy of communications.

For three years now, after all, we have proven that we learn from our failures to become better. I, personally, never hid in the face of difficulties or responsibilities. In an often lonely but constant battle of self-criticism and striving for continuous improvement.

Losing, perhaps, for the moment some battles with chronic ills. But winning the war of major wagers. And above all, without ever losing sight of the goal of a strong, democratic, European and nationally independent Greece.

I will continue to walk this path, so that together we can build even more solid and time-resistant Democratic institutions