I believe there is not one person who does not recognize the site of the Parthenon, one of the oldest symbols of the cradle of civilization, that stands timeless on a mountain that dates back over 5,000 years at the center of one of the most renowned cities of the world, Athens, Greece. Athens should not just be a city you travel through before heading to the islands. Athens is one of my favorite destinations in Greece, and I am sure will be yours, once you discover all that it has to offer.

Myth has it that a battle between the Goddess Athena and the God Poseidon took place for who would be the ruler and protector of the city. The first king of Athens, Cecrops resolved the difference by asking the gods to offer gifts to the citizens and they would decide. Between the sea water spring of Poseidon and the olive tree of Athena the Athenians chose the symbol of peace and prosperity, the olive tree. Hence the legendary city was named Athens after the Goddess of wisdom.

Athens dates back to the first settlement of the Neolithic period and at a time what seemed to be a small village grew to become one of the first and most powerful Hellenic city-states during the Golden Age of Greece under the rule of Pericles. Myths, legends, and historical facts are the elements that define the beginning of Athens history. The citizens of Athens managed to invent themselves as an impregnable powerful city producing great citizens ranging from philosophers, politicians, artists and leaders. Athens was a civilization that boasts the birth of philosophical, political and scientific thoughts, ideals, social morals and standards that have been the foundation and influence of the world throughout the ages of time. Aristotle preached in his “Purpose of Life” that the pursuit of happiness is every man’s goal. 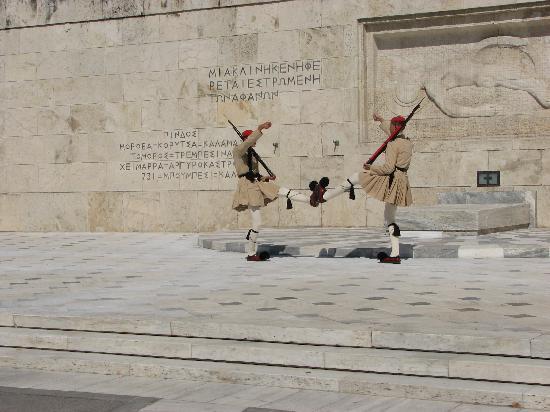 Athens today has her modern city built over and around her ancient ruins, the charming buzzing city has a modern infrastructure with everything in a distance of 5-45 minutes depending on your destination of choice; archeological sites, shopping, beaches, nightlife, casinos, ports or the airport.

Athens is known as one of the most cosmopolitan cities of the World and thus accommodations are available for all budgets. There is an abundance of hotels in Athens, they range from 3-5 star choices and many are among the leading hotels of the world. Transportation has never been easier and with choices ranging from taxi, tram and metro. 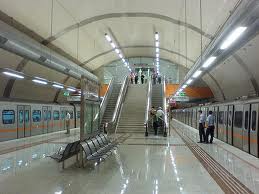 Nowhere else in the world will you experience what you will see when riding the Athens metro. There are impeccable ancient sites found during the metro construction. They have been preserved as mini museums, therefore your ride in the metro includes site seeing! 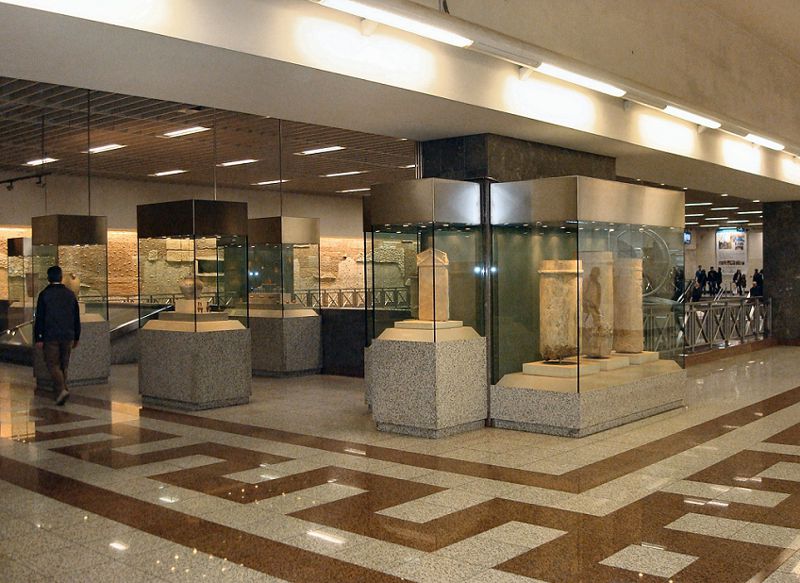 Touring around the city is easy by foot, metro, tram or taxi. Starting with Constitution Square, most of the sites are walking distance, so be sure to wear comfortable shoes! Stroll through the Queens Garden, which will lead you to the Temple of Zeus at Styles Olympion Dios, across the way begins the cultural park tour with the first theatre of the world Dionysos, therafter is Herodion theatre built after the Roman governor Herodion Atticus. Every year you can enjoy ancient Greek Drama during the Theatre Festival, be sure to check the schedules for unforgettable performances. 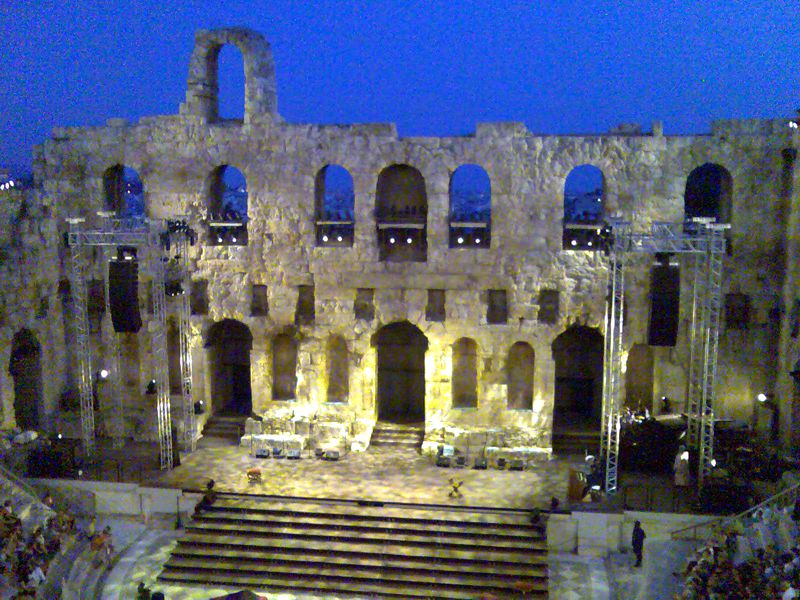 The world renowned, Acropolis Museum houses the most precious artifacts preserved from the Parthenon and surrounding ancient buildings. As you walk towards the Acropolis you will find the Asklepion temple serving as the ancient healing center for the citizens, always built near the town in antiquity. As you climb up the mountainside and approach the acropolis, the grandeur of the buildings will leave you in awe, asking yourself the same question people have asked throughout time “how did they build such magnificent buildings in antiquity with such detail, precision and impeccable beauty. The Ancient Greek architects, engineers and artists have never been surpassed in natural stone material design, architecture and engineering.
Across the Parthenon lies Arius Pagos where the greatest political thinkers debated over the birth of democracy and where the senate was born. 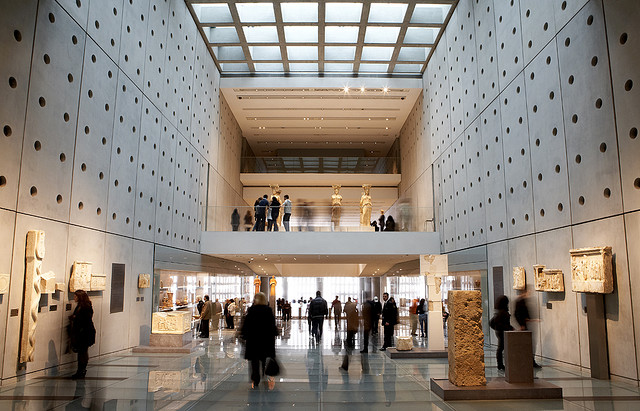 The most well preserved Temple of Yfeston can also be seen, the ancient market lies right under the acropolis; Plaka and Monastiraki, there you will experience the modern market full of little shops with excellent replicas of antiquity and more souvenirs, wonderful taverns with authentic Hellenic cuisine and many old churches with hand painted icons are a must see.

The paved Ermou street has endless stores with great prices! Kolonaki is a sophisticated shopping destination with every name brand you can think of, the paved streets offer lovely window-shopping and many quaint restaurants and cafes where you can enjoy fine Hellenic cuisine. 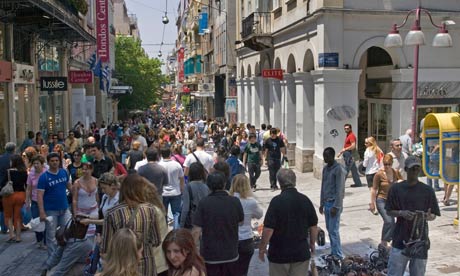 Lycabytus is another breathtaking “look out” point that offers an amazing view of the Acropolis and the sea by the port of Pireaus. 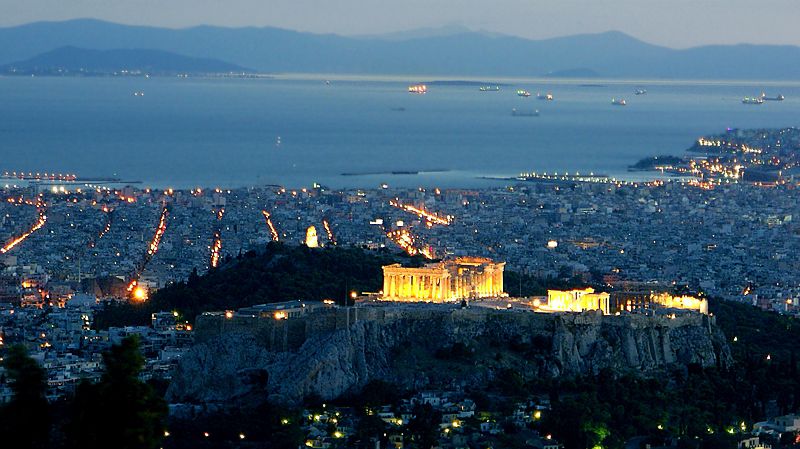 Museums are located all over the city so be sure to pick up a guide at the kiosk and don’t miss out on the wonderful artifacts dating back to antiquity continuing on to the Roman period, throughout the byzantine era and contemporary collections by famous Greek artists.

There are so many areas to explore around the center of Athens that are worth visiting.

Heading down to the Coast, your first stop should be the ancient town of Pireaus. The Posrt of Zea also named Pasalimani is one of the largest marinas in the Mediterranean and offers many boats to the islands. Mikrolimano is lovely little harbour to visit, full of yacht and fishing-boats. The picturesque scenery is complemented by traditional fish tavernas. Above it, stands the hill of Kastella, with a panoramic view of the port and full of traditional Homes. 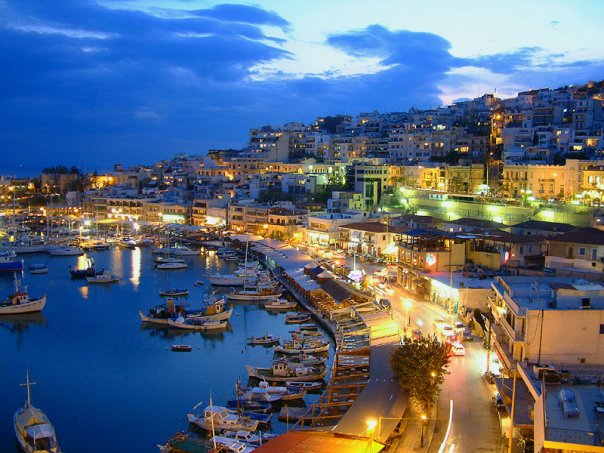 The beaches are along the coast and extend all the way to Sounio. Only 20 minutes away from the center of Athens are many different great areas to visit: Glyfada, Cavouri, Astir beach Vouliagmenis, Vouliagmenis Lake, Lagonisi and Sounio. 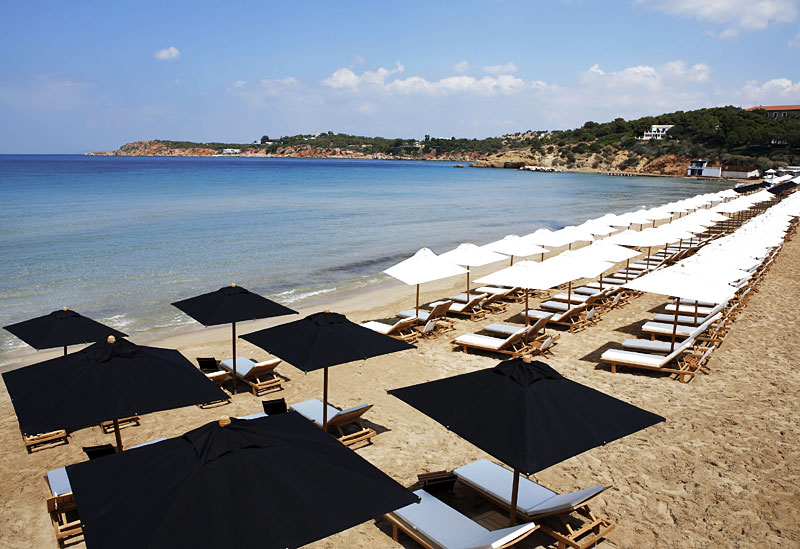 I also suggest you visit Vouliagmenis Lake, which is along the coast line. Vouliagmenis Lake is a special place with the deepest blue water that has minerals and used as a spa because it has been found to have many healing properties. It is about 50 centimetres above sea level and it is constantly overflowing and replenished by hot springs that lie beneath it. Its water has been found to be comprised of minerals that include; potassium, natrium, lithium, ammonium, calcium, ferrum, chloride, iodine. All these minerals in the water have been found to relieve bone and muscle problems, and offer healing to a number of diseases. It’s been considered a phenomena of nature since its discovery research and scientific studies have been performed and revealed that millions of years ago, there was a large cave with many hot springs that at some point the roof collapsed because of the high temperature and the moisture of the springs. Today the minerals are still streamed into the lake through the hot springs and since people have been swimming in the lake for therapy or for fun. The grounds have been developed and beach chairs and umbrellas are offered along with a cafe-bar-restaurant. Also, just across the street is Vouliagmeni beach, considered one of the best beaches in Athens. There are many nice hotels and lots of cafes, bars, tavernas and restaurants to stay in the area. 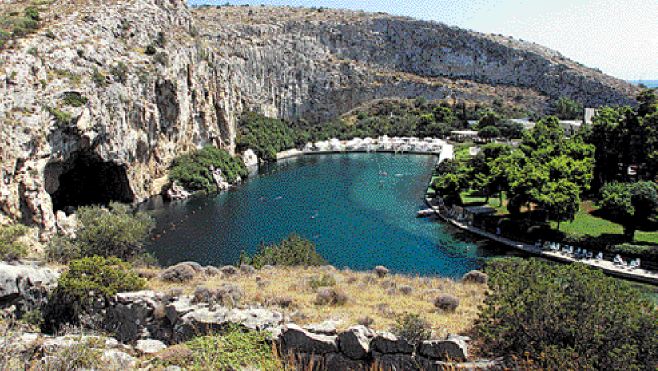 I must stress that Sounio is a must visit destination outside if Athens. The amazing temple of Sounio sits above the beach on a mountain overlooking the sea and was dedicated to the God of the Sea, Poseidon. The temple was always last landmark to be seen when the Athenians sailed away and the first as they returned.
The temple of Sounio was first mentioned in the Odyssey, as the place where Menelaos stopped during his return from Troy to bury his helmsman, Phrontes Onetorides. This Doric temple was built in the 5th Century BC, on the ruins of an older one. From there you can see the islands of Kea, Kythnos and Peloponessos.
Sounio in general, is a favorite destination for enjoying the beach, a great swim, having drinks and traditional meze (small share plates) at the tavernas on the beach and of all of this course while waiting for the breathtaking famous Sounio sunset. According to legend there is a certain day each year that at the Temple of Poseidon, at the time of the sunset you can faintly witness the image of the ancient golden statue of Athena that use to stand on the Parthenon of the Acropolis of Athens. 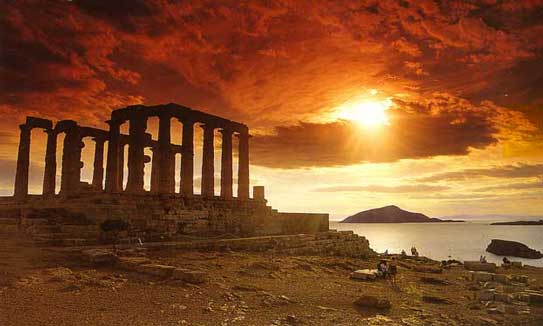 Besides the coastal line of Athens, there is also the Northern Suburb Area of Kiffissia. Kiffissia is surrounded by green hills with beautiful homes and apartment buildings. The center of Kiffissia has a great shopping hub, offering many name brand flagship stores that are surrounded by quaint cafes and restaurants. Kiffissia is a great shopping destination. Beyond the northern suburbs there are many other beaches worth visiting such as; Vavrona, Skinia, Nea Makri and Varkiza, offering golden sandy beaches with great water sports and café bars and taverns with traditional Greek cuisine. 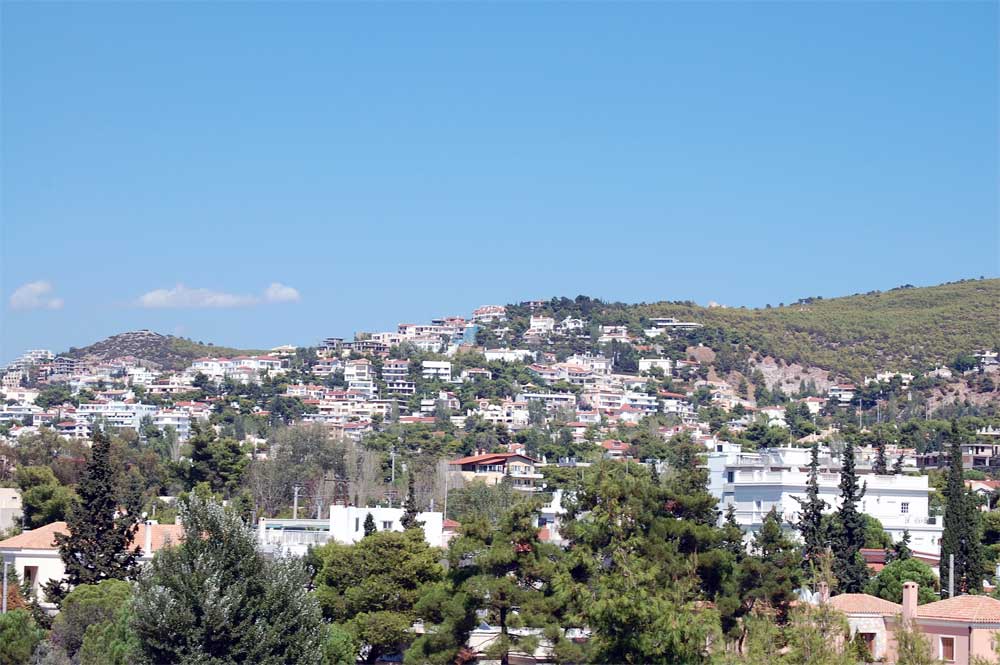 Greece is world famous for her nightlife! Anywhere area you decide to go out at night, you will experience the amazing Greek entertainment lifestyle! Check your hotel room guides for suggestions. 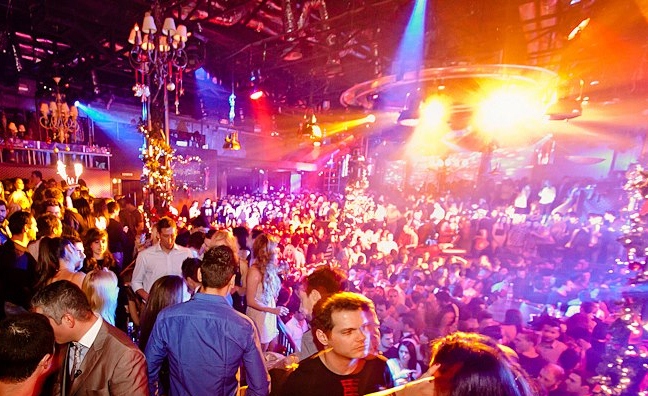 Overall, any time and any season, wherever your destination of choice in Greece, the first and last stop before departing to another destination should be Athens; rich in history, full of architectural wonders and unforgettable exciting cosmopolitan lifestyle, Athens is a timeless destination that makes visitors visit over and over again discovering and seeing something new on every visit.