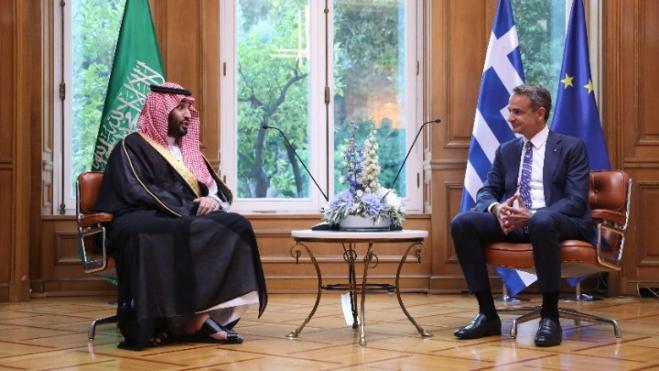 In joint statements before rolling cameras at the Greek prime minister’s Maximos Mansion office, Prince Salman confidently stated that his country can provide Greece and the rest of southeast Europe with cheaper and more effective energy, via connected electricity grids and with power produced from renewable energy sources.

The specific prospect, ie connecting power grids, was the object of a bilateral MoU signed by the two sides afterwards.

The energy-related news item emanating from the meeting, also announced by the Saudi crown prince, is Riyadh’s proposal to base a hydrogen hub for Europe in Greece. He also pointed to investments aimed at boosting telecoms connections between the two regions and beyond.

The official visit was noteworthy because of the fact that it was the first to a European country by Prince Salman in the wake of the Covid-19 pandemic.

On his part, Mitsotakis said the Greek side wants to attract much more Saudi investments to Greece, while also congratulating Prince Salman over the Saudi government’s “Vision 2030” program.

It must be noted that Greece has sent a Patriot Missile Battery to bolster Saudi defenses against attacks by drones and missiles.